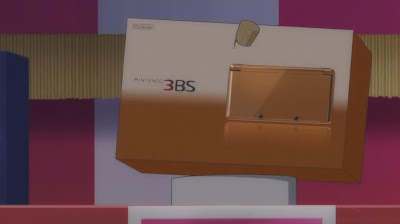 Japanese animation continues to take inspiration from its own culture. In the gun-inspired anime called  Upotte!!, a handheld resembling the Nintendo 3DS was shown.

The handheld in the anime was called the Mintendo 3BS. Not sure if BS is a means of bashing around but the episode starts with a boy being mocked about the device that he won fair and square.

It's common for Japanese anime to make references to their own game consoles but it's especially important when we see something as cool as the 3DS being paid homage to. The episode was called "Grip and Hold!" and was the first episode for the anime aired back on April 8, 2012 in Japan.

Thanks to Kyle of Pinoy3DS facebook group for the tip!
Be the first to comment • Discuss in forums • Posted on Wednesday, October 10, 2012