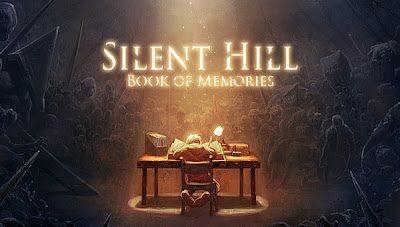 As promised, here's our first impression of Silent Hill: Book Of Memories based on the demo. Is it worth your time and money? Read on!

The story starts with your character, which I'll refer as you, receiving a weird book on his birthday. You begin to browse the book and discovered that all your past memories are all in the book. You then wonder if  you can re-write what's written in there, and then you fall asleep.

You begin to get inside a nightmare and happen to meet the person who delivered the book to you there. You'll come to realize that things and places that happen to you inside the nightmare are all in the book. You'll also come to discover that your nightmare has some link to reality.

The game closely resembles the MMORPG style of Diablo. You play mostly on isometric view, killing enemies, entering doors, picking up weapons, and collecting stuff. The dungeons doesn't seem randomized, and is well laid out on a map.

The Diablo reminiscing stuff doesn't end there. The game maintains a level up and stat system. You can also revisit notes that you find on the way. Your basic form of survival is equipping with ranged or melee weapons. Melee types come in form of knives, pipes, etc. Weapons get destroyed, so you have to find a tool to prevent your weapon from breaking.

The demo had a focus on one person (Derek) related to your character and the whole demo was divided into three zones. The first two zones will make you complete some missions and then you'll be required to solve a random puzzle. Once you complete the puzzle, you'll be rewarded by a rare weapon.

The third zone is actually a boss fight and was the toughest part of the game. After defeating the boss, you'll get a special weapon. You'll also wake up from your nightmare and the demo ends, so the weapon is basically useless.

It was a very lengthy play, about 45 minutes to an hour at most. The demo didn't seem to have multiplayer support so this impression was made only for solo play. There wasn't an option to save the game but there was some sort of quick save functionality which you can trigger by going to the library. If you die in the game, you'll be brought back in the library with the last state you had before you saved.

Though Konami have totally strayed away from the Silent Hill games that we used to know, it's not a total crap. It delivers a very interesting storyline which has always been a strong point of the franchise. The gameplay also seem to pose a very addictive nature of Diablo type games which are leveling up and collecting stuff. It can even get more fun with multiplayer.

We would say that the game deserves a chance. Just don't set your expectations too high and definitely don't expect this to be like any of the Silent Hill games you've played before.

Silent Hill: Book Of Memories was developed by WayForward and is due for release on October 16, 2012 in the US. The game is exclusive to the PS Vita system.
4 comments • Discuss in forums • Posted on Friday, October 5, 2012

At least the spinoff that the 3ds got was way better. This sucks!

You must be referring to the news post? It's still there. :)