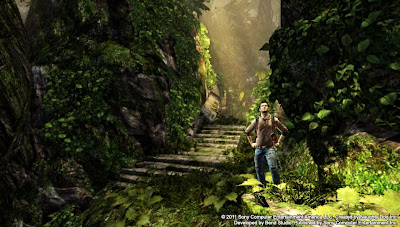 Uncharted: Golden Abyss is the fourth installment in the Uncharted (also called Drake) series. It's one of those first party games published by Sony themselves, and the game was developed by Naughty Dog and Sony Bend.

The plot happens before the events of the first game, Uncharted: Drake's Fortune. You start off hunting treasures with your friend Dante, and eventually find yourself caught up in some sort of military conflict and a woman named Chase. So much for finding out about 400-year-old massacre of a Spanish expedition.

While Nathan Drake is basically just a normal human being, he does things more than a normal human can do. Who knows how many push-ups and pull-ups he does everyday? I guess it would be wrong to call him Spider-Man, yet his acrobatic skills are awesome.

The game combines several elements from games like Tomb Raider, Prince of Persia, Call of Duty, Metal Gear Solid and Time Crisis in terms of gameplay. It's an action-adventure in essence, with some first-person shooting.

You run around, jump from one edge of a cliff to another and a lot of times do some monkey bars. When you explore the environment, there are three things that you will almost always keep in mind. First, if are there any treasures around. Second, if there are incoming enemies. Third, if there is something to hang-on to. These make the basic building blocks of Uncharted: Golden Abyss.

There are some puzzles to solve, but it doesn't take a genius to solve them. Naughty Dog and Sony Bend did a good job of making use of the Vita functions to solve puzzles. For example, you could be clearing up charcoal rubbings by swiping your finger on the touchscreen. Alright, maybe that's not a puzzle but there are quite a few others like moving statues around on their proper places, also by using the touchscreen functionality.

The game is quite lengthy and is divided into 34 chapters. The story starts with a prologue, and then succeeding chapters fill-in what happened in-between. Each chapter is uniquely titled, and most could be happening in the same geographical area. There is no immediate goal that you have to accomplish, you basically just have to go with the flow of the story.

Now for the Call of Duty/Metal Gear Solid/Time Crisis part of the game. Drake is by default equipped with a gun, but you can also pick up weapons from enemies you've killed. Weapons range from a normal hand guns, machine guns, into really high caliber weapons. The right analog stick comes very handy during shooting scenes, and so does the motion control support. You can use walls and crates to hide from enemies, then fire back at enemies shooting at you. It's pretty much how you see in the movies. 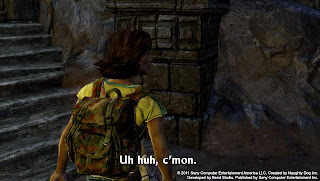 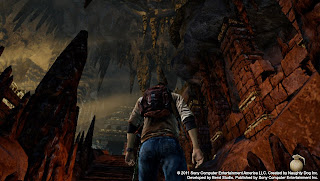 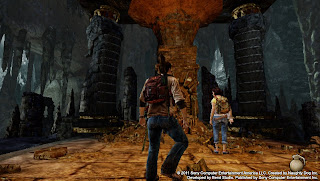 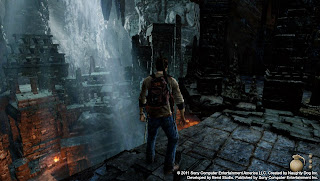 There are no healing items in the game. Drake basically just recovers on his own and his health is indicated by the color of the screen. When you see the screen in full color, it means that Drake is healthy. As his health deteriorates from the damage he receives, the screen becomes more monochrome (black and white).

There are two ways you could fail in the game, either Drake dies or your partner gets killed. Dying in the game comes in many possible situations ranging from falling from a cliff, getting shot to death, or having a pillar fall on you. That's rated Teen for you.

There are some glitches in the game that are very noticeable but not necessarily game breaking. For example, if you've seen dead enemies freezing in counter-strike, you'll also see those here. You could be wasting some ammo thinking your enemy is still alive. There are also times when your partner's AI just get so confused and freeze.

The environment is vast but it would be wrong to say that it's an open-world. There is a degree of openness but not the kind that really makes you feel free.

While we hoped that this would showcase the Vita's limitless power for portable gaming, there are some minor disappointments with the graphics. For example, the textures feel too shiny, and the characters don't open their mouths when they talk during play (except during cutscenes). These things can be trivial though and doesn't really take less from the overall experience.

The environment is just amazing. Water does look like water, and if you don't go out often to see the nature then this game will make you ask yourself why. Just don't do those Drake stunts, OK? Everything looks realistic, and we like the fact that you could actually go to places you see from a distance.

For the most part, jumping from platform to platform, ropes or edges of a cliff isn't much of a problem. Drake basically snaps to the direction and distance that he needs to jump.

Pretty much like the PS Vita's lack of physical controls support (before v1.8 firmware update) to navigate around the menu, it's also very hard to just use the touchscreen. You'll have to navigate the game's menu using the touchscreen alone.

While it's good that Naughty Dog/Sony Bend tried to utilize all of the PS Vita's functions, there are certain times when the feature doesn't fit the intent, and in the end makes it feel like it was forced. For example, you have to clean an object of some dirt which you do using a touchscreen. In order to clear up all the parts, you have to rotate the item using the rear touchpad. This could've been done better using the analog sticks, but instead they used the rear touchpad which felt very unnatural.

I'm not sure about the previous PS3 installments but the voice actors were pretty damn good in this game. Drake, and everyone who gets along with him keeps on babbling. It's not really annoying, you can actually learn a thing or two about the characters and even get hints on what to do next in the game. If it's your first round playing the game, it's highly encouraged that you play with ear phones in full volume (just kidding).

The soundtrack fits the game perfectly. We like the way the music adjusts to the mood of the game. For example, the music gets more intense during a shootout, and then gets peaceful depending on where you are.

Overall, voice actors and the soundtrack were good. Just one thing we noticed, the voices always seemed "close". There seems to be no concept of "sound from from away" in this game.

There are tons of things to collect in the game. It's a good thing that you can go back to previous chapters. For completionists, there are some good trophies to collect. You can try playing on different difficulties first, then you can go on collecting all the treasures and other mysteries you've missed.

Uncharted: Golden Abyss wasn't so bad for a launch title. The graphics is superb, far superior than anything we've seen on a handheld or mobile device during the time it was released. It's a good first game for anyone buying a Vita for the first time and a good addition to any owner's game library.

I would like send my gratitude to this wonderful, unbias and Filipino gamer review, I appreciate also on the main page that a separate link ko 3ds and playstation owners,

Keep up the good work in your team...

If it's making you happy then we're doing more of it! Thanks for dropping by and the wonderful praises.  As always, we're very happy to hear from a fellow Pinoy! :)