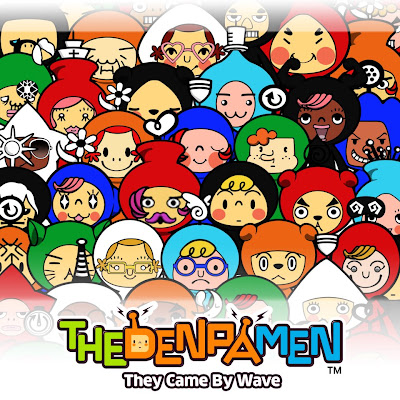 Genius Sonority Inc. gives us 30 tries to try out the demo for The Denpa Men a few days before its release in the US.

Even in my weirdest dream, I never thought that creatures could actually live in radio waves. Not so with The Denpa Men. You start off with a Denpa asking help from you. The next step is to gather around  more of them in order to start with your mission.

The dungeon exploration follows a traditional jRPG style of looking for a way to the next area. There are also treasures to scattered around the area.

The battle system is turn based. The action happens on the top screen and you can command the Denpa Men on the bottom screen.

Depending on the Denpa Men you catched, they could vary with different attributes. Some are purely built to attack, some have stronger resistance to certain elements, those with an antenna can use skills (magic) for an AP cost. The attack sequence is determined by the character stats such as speed so you can have enemies faster than you attacking first.

It was quite a satisfying try. Another good thing is that you can save your progress so that you can continue where you left off in case you want to buy the full game.

Great... Now this or Fractured Soul?

Until we can do a review of either of them, we can't really recommend. :) It's only Denpa Men (demo) that we had our hands on so far and it was great!