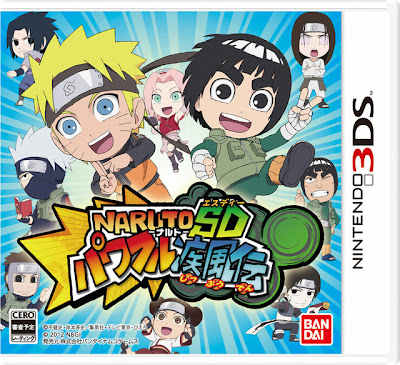 Another Naruto game will be hitting the Nintendo 3DS on November 29th, 2012 in Japan.  The game will be called Naruto SD Powerful Shippuden.

The game will feature a 2D graphics in SD (super-deformed) style. It will be a side-scrolling beat'em-up game just like Naruto Shippuden: The New Era by Takara Tomy, but this game is under development by Inti and will be published by Bandai Namco Games. The game is said to bring a "comical action experience".

Playable characters include Naruto and Rock Lee while characters such as Sakura, Sai, Yamato, and Neji act as support characters which you can call by tapping on the toucscreen. Orochimaru and Kakashi has been known to be bosses in the game.

Naruto SD Powerful Shippuden will retail in Japan for 5,230 JPY or about $66. People who pre-order the game will get a bonus Leaf Ninja forehead protector style game cart case that can store up to three 3DS games.

Thanks to Andriasang and Siliconera for the info. Check out the official site here.
Be the first to comment • Discuss in forums • Posted on Wednesday, September 5, 2012