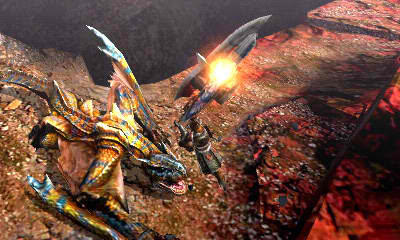 Finally, we get a definite mark for Monster Hunter 4. The still 3DS-exclusive game will be coming over to Japan in March 2013. It was announced during the Tokyo Game Show a few days ago with some multiplayer gameplay demo.

Capcom also released a new trailer which shows new monsters, moves and the open-world environment. It sure looks a lot better in motion than with Screenshots.

We still haven't heard of a US release date but at least we got Monster Hunter Ultimate coming over to North America next year. Be sure to visit us again for more Monster Hunter 4 and Nintendo 3DS updates!

Still waiting for the VITA release, it could be awesome, I guess games on vita was delayed because of Hackers emerge

Monster Hunter 4 on Vita? You can keep dreaming. Capcom is tired of selling units for Sony.

I agree its only a dream, nuff said