Magi: The Labyrinth Of Magic For 3DS Revealed By Namco Bandai 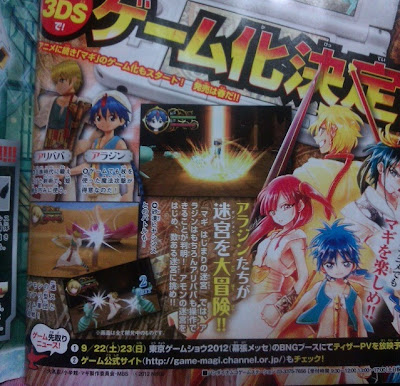 During the TGS, Namco Bandai revealed about their upcoming game called Magi: The Labyrinth Of Magic. The game is based on a Arabian Nights-themed manga (Japanese comics) written and illustrated by Shinobu Ohtaka.

The story revolves around a desert boy named Aladdin who travels with a magic flute that summons a djinn (genie) named Ugo. The game will be an action RPG and will be using full 3D models. Confirmed playable characters so far include Aladdin and Alibaba which is another character in the manga.

Magi: The Labyrinth Of Magic is expected to be released in Spring of 2013 for the Nintendo 3DS. An anime version of the manga is also scheduled to be aired sometime in October.

Source: Siliconera, allgamesbeta.com
Be the first to comment • Discuss in forums • Posted on Monday, September 17, 2012