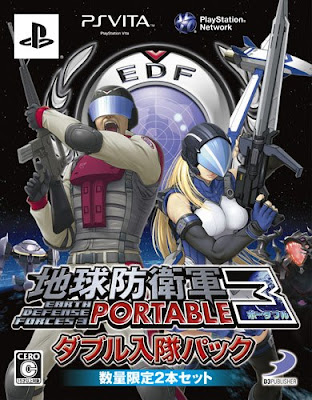 Earth Defense 2017 Portable also known as Chikyuu Boueigun 3 Portable in Japan will be coming over to North America and Europe.

The game originally came out in 2006 in Japan for the XBox 360. A portable version of the game was just released last September 27 for the PlayStation Vita in Japan. It was confirmed through the game's official Facebook page that an English version was indeed coming to North America.

Earth Defense Force 2017 Portable is an arcade-style third-person shooter developed by Sandlot and published by D3.  It features various weapons and vehicles in order for you to fight against gigantic ants, spiders and robots.

It was later confirmed through the game's Twitter account that "Earth Defense Force 2017 Portable will be coming to Vita this Winter" and that the game will also be coming to Europe.
Be the first to comment • Discuss in forums • Posted on Saturday, September 29, 2012