Talking Point: Does The 3DS And Vita Provide A More Complete Experience Than iOS Devices? 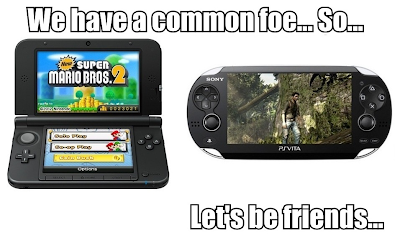 A few months back we covered almost anything about video games. Since we could not afford of all the current game consoles and most of us have day jobs and our only time to play is during a ride on the train, we decided to narrow down our coverage to handheld games.

We covered the iOS, more specifically the iPhone for a good two years. And yeah, there's a lot of demand for reviews, news and cheat codes for that platform. However, we quickly figured out that something was lacking if we wanted to serve the hardcore gamers. We had to find out what it was, and here's what.

The iPhone didn't give the experience we wanted as gamers. It's just not enough. It didn't give quality graphics, it didn't give good controls, it did not satisfy our cravings for long and quality games.

The lack of physical controls on the iPhone was frustrating. We tried giving the Street Fighter ports a chance but it just doesn't cut the deal. With the Nintendo 3DS and PS Vita, developers can choose to let players control the game by either using the touchscreen or physical controls. There is more sense of freedom this way. For example, Super Street Fighter IV: 3D Edition adds additional ways to easily execute moves while I can still rely on my athleticism (ehem) to do things that could help me win.

Is it just the controls? Hell no! There are other things like sound, graphics, and most important of all, gameplay. The iPhone is a den for games that are designed for players to do the same thing over and over again. It's also limited to mostly 1 or 2 music that also repeat over and over again!


“
The iPhone didn't give the experience we wanted as gamers.

True, sometimes the graphics look equivalent or a little better than the 3DS on Screenshots but you'd notice how inferior the iOS games are when you look carefully into detail. For example, you could start looking for shadows, how detailed is it? Is dynamic lighting supported? How about the polygon count? We know for a fact that a lot of developers rely solely on the iPhone's retina display and use textures in place of actual polygons. Gamers who are smart enough will know these things for sure.

Now, I'm not sure what's on the mind of major publishers (e.g. SquareEnix, Capcom, etc.) who keeps releasing new IP's on the iOS platform. Maybe there is profit in there, or maybe they are just testing the waters. From what we can see, these major publishers are creating things that they'd want to forget sometime in the future. SquareEnix and Capcom can live proudly with their legacy games such as Final Fantasy and Street Fighter, but these iOS games will be like words they wish they never said. It's the not kind of thing you want to be remembered with.

Kids like the DS more than they'd ever want an iPhone or a tablet. It's the same case for the 3DS. I have a three year old kid who played mostly on the iPhone before I brought home a 3DS. Now, he only plays Mario.

Games are just like the real world. Physical buttons act as the sense of touch, HD provides a 20/20 vision, 3D gives depth, touch is like hand-eye coordination. You can add up to the experience but it'll be hard to take away. When they introduced the virtual buttons and joystick, it was one of the worst experience I had as a gamer. It's like typing on a keyboard with my toes! It felt so unnatural. It was such a pain!

I guess I don't have to explain more than I already have. This is why portable game consoles are not going away anytime soon. They may not be going anywhere at all!

So what's your side? We'd like to hear your thoughts! Be sure to leave your opinion on the comment box below.
11 comments • Discuss in forums • Posted on Saturday, September 22, 2012

I just borrowed IPAD2 from a cousin and it seems its for casual gamers , Hardcore games are in PS Vita and some are in 3DS, I own both system, In my humble opinion only.

I used to game on my iPhone but it didn't take long for me to realize that, as you've said in your article, the overall quality and replayability of iOS games don't come anywhere close to console games.

Trying to game on iOS - can't work for me, too many distractions (SMS, Calls, notifications, bleh).

I did play one game that took me hours though... Infinity Blade... But it was more of a curiosity thing to find out what the iOS game has to offer. It was fun for a short while. Also bought Infinity Blade 2 but never played it like the first one.

seriously
what kind of stupid question is this?? who's asking? Tim Cook? or just some dumb Apple fans trying to justify iOS devices as dedicated gaming platforms? it's NOT!

Agree completely with you. There are some decent games here and there, but nothing on 3ds / Vita level of quality and depth. Besides mobile games have two big problems for me, battery drain and saving. On portable consoles you can set the console to sleep and continue later, but on my android phone if you get out of the game suddenly there's a huge posibility you'll lose your recent progress. And about battery, all good looking games drain your battery like crazy, and that on a device that you'll need to use for many other and more important things is a huge letdown.

Hey, that battery part is something I totally haven't thought about! You're right! When you run the most graphics extensive games on the iOS, you also drain the battery FAST!

It's the voice of a billion hardcode gaming fans!

Totally agree with you, I own a ps-vita, an I-phone and I will buy a 3DS soon .. games on mobile platforms are very limited in every way possible