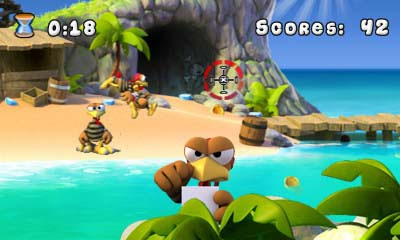 Come back here you chicken! But these are not ordinary chickens you'd be dealing with in this game. They are Crazy and they are pirates!

In Crazy Chicken Pirates 3D you are given 90 seconds to score as high as possible. You mostly earn points by shooting chickens but there are also other ways to increase your score such as finding hidden treasures and taking down a UFO.

While things like accuracy isn't given weight in the game, you get a point deduction with every ammo reload you make. During your first few tries of the game, you'll probably try and explore what else the game has to offer. While it does have a few surprises, you'll find out that it lacks a few important things which we'll talk about later. 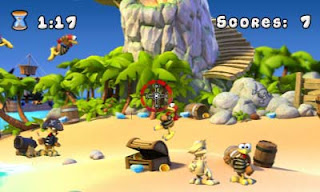 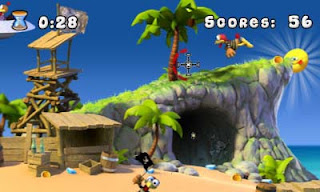 Crazy Chicken Pirates 3D basically puts you in first person view in front of an island with chicken pirates all over the place. The graphics is in 2D and hand-drawn, the characters look nice and the environment is well polished. Surprisingly, the game works very well in 3D. You won't have to move the camera much nor the background will be moving much so you'll be spared some headache and eye strain.

There isn't anything special to mention about the game's music but there's something with the main song that makes it stick to your mind. There's no music during the actual game other than the sound of the breeze and the intense coming of the shark, you'll mostly be hearing the sound of your gun and the noise that the chicken pirates make.

The controls involve the stylus and the touchscreen to aim. You can use the analog stick to pan the screen left or right. The L and R triggers are used to to shoot and the DPad's Up button to reload. If you're not comfortable reloading using the DPad, you can also just press the reload button on the touchscreen. In some sense, it basically follows the Kid Icarus: Uprising control scheme (and strictly, seriously, only about the control scheme). 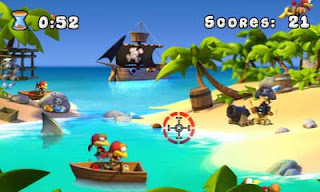 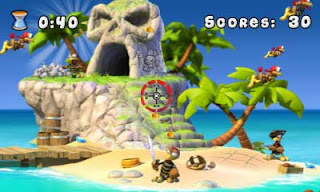 As we mentioned, there are hidden things in the game. If you reach a score of 1,500 or higher you can unlock a bonus stage. The bonus stage involves a chicken shooting a Canon at incoming boats. You can use the stylus to aim but in very much different way. There's a gauge on the right side which basically tells how far a canon ball will go, but it's very hard to control. If an approaching boat reaches your ship, it's game over and you'll have to score as much again in order try the bonus stage. It could have been better if this was offered as a separate mode instead.

This is Teyon's second 3DS eShop game release next to Bird Mania 3D. Unlike their first eShop game however, Crazy Chicken Pirates 3D doesn't come with an achievement system or an on-line leaderboard. Depending on your  taste, this can be a real deal breaker since most iPhone games come with both, why would a 3DS game not?

Regardless of the things missing, Crazy Chicken Pirates 3D will surely put your idle mind in motion. The idea of scoring as high as possible in a game isn't so bad when you only need to kill time. For less than $2, it ain't such a bad deal and it's something you should have on your 3DS just in case you get tired of playing lengthy games.

The review copy for this game has been provided by the publisher.
Be the first to comment • Discuss in forums • Posted on Saturday, September 1, 2012