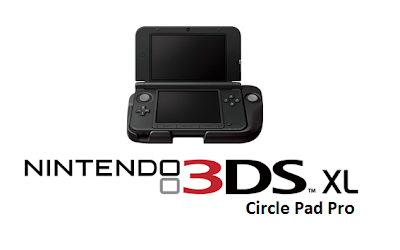 The 3DS XL gets even larger with Nintendo unveiling the 3DS XL Circle Pad Pro. Don't get too excited though as there's no price and release date announced so far.

The 3DS XL Circle Pad Pro has some noticeable change in its design. It's easy to spot the curvy edge on the right, probably to help players get a better grip.

The 3DS XL Circle Pad Pro also caters to the XL's new layout as can be seen on the image above. The headphone jack can be inserted on the left-most part of the device whereas the old one is in the center. It's probably a little too early to tell but it looks more natural than the old one.

The old Circle Pad Pro was priced around $20. Hopefully, the new device will come out for only a few dollars more or at the same price.
Be the first to comment • Discuss in forums • Posted on Friday, September 21, 2012