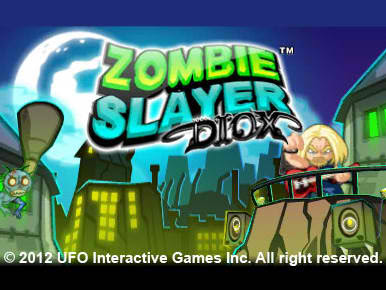 Zombie Slayer Diox was developed and published by UFO Interactive Games. It was released on March 22, 2012 for $5.99. It's the first rhythm game released on the North American eShop as a 3DSWare.

The plot happens in the year 20xx when zombies have taken over the major cities of the world. Diox is able to lure the zombies with his song and guitar tunes. Once the zombies come to him, he can cut them in pieces.

The game features a side-scrolling 2D plain with Diox on the left and the zombies coming from the other end. The premise is that you have to correctly time when to slash the zombies up until you reach the end of the level.

There's a circular guide just in front of Diox which basically gives you the cue when to slash.With every successful hit that Diox makes, an electric guitar tune plays.

While the zombies look convincingly Zombies, the character design falls short from already popular zombie games such as Plants vs Zombies. The main character, Diox, doesn't give enough heroic effect, the likes that you'd want to have an action figure of. Compared to games like Mutant Mudds and Mighty Switch Force, this game really falls short in the design department.

I've played other rhythm games before and perhaps this game should be compared with handicap such that it's an eShop game and there are certain limitations. However, Zombie Slayer Diox lacked any alternative other than sliding your stylus on the touchscreen (easy mode) and the harder version of it where you also need to press the DPad button along (normal, hard). The game starts to feel repetitive after a few tries, because, as I said, it lacks variation.

Being rock inspired, it can be a little hard to appreciate the music in this game if you're no rock n roll fan. Even so, I hardly found any catchy tune which is very important in a game like this.

I find myself using my peripheral vision a lot. This difficulty makes the game preferable to play in 2D than in 3D most of the time. In fact, the pre-game and post-game screens are the only times when you'll feel turning the 3D on.

As much as we'd like to say "it's nice to play something different", we'd advice you to think twice before getting this game.