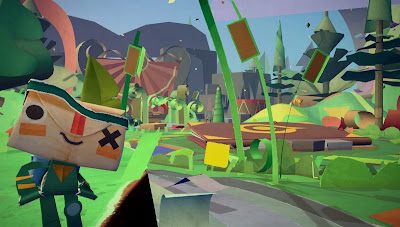 Sony World Wide Studios boss Shuhei Yoshida was quoted to say that the upcoming adventure game for the PS Vita, Tearaway, is a perfect example of what is possible on a PS Vita game.

"Tearaway is a really good example of a game that is from the ground up with the PS Vita features in mind. At launch we have made so many new features in PS Vita launch titles and many take advantage of this, such as the touch in different ways. Some of them are not natural and have been criticized by the media, when to enforce them, or were attached. I hope when people play Tearaway are the features of the PS Vita natural feel for the integration into the gameplay. "

Tearaway is being developed by Media Molecule exclusively for the PS Vita.  Tearaway is set in a papery world where you take the role of a messenger named Iota in a delivery adventure. The game takes full advantage of the PS Vita's features such as the the rear touchpad and see your fingers pop-up in the game world.

Tearaway is anticipated to come sometime in 2013. Media Molecule is the developer behind the 3D platformer hit for the PS3 and PSP, LittleBigPlanet.

Thanks to playfront.de.
Be the first to comment • Discuss in forums • Posted on Wednesday, August 22, 2012