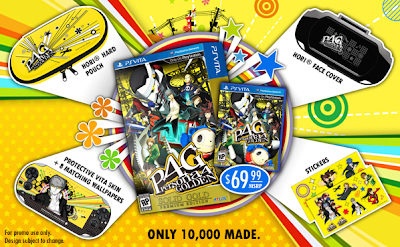 Thinking of getting Persona 4: Golden for the PS Vita? You might want to get it earlier as ATLUS announced a special promo called Solid Gold Premium Edition.

The promo will include the game, a Hori Hard Pouch, a Hori Face Cover, protective skin and stickers which has some of Persona 4's popular stars.

Only 10,000 copies are produced for this promo and will be made available at select retailers. Persona 4: Golden Solid Gold Premium Edition is available for $69.99 while the standard edition costs $39.99.

Persona 4: Golden is scheduled for release on November 20, 2012 in the US. The game will be available in retail as well as in digital format through the PS Vita's PlayStation Store. Check out the Screenshots.html of the game here.
Be the first to comment • Discuss in forums • Posted on Friday, August 24, 2012