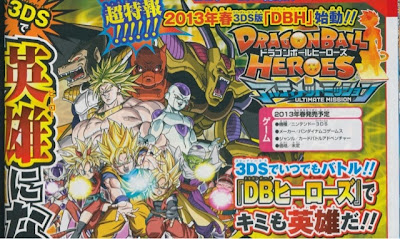 Finally, a Dragon Ball game for the 3DS! Unfortunately for fans, we're getting some sort of card game instead of a fighting game in which we are all already used to getting. The game will be called Dragon Ball Heroes: Ultimate Mission.

The game is based on an arcade card game that was releases back on 2010. Namco Bandai will be responsible for bringing the game over to the 3DS. As reported by Andriasang, the 3DS version will feature a story mode, wireless connectivity and integration with the arcade version.

The game will also feature 200 different characters and 800 cards. The game is basically turn-based and will make use of the 3DS stylus to control the card deck.

Dragon Ball Heroes: Ultimate Mission for 3DS is expected to come out later this year in Japan. There is no word of a North American release so far. Based on historical facts, it seems very unlikely.
Be the first to comment • Discuss in forums • Posted on Sunday, August 19, 2012