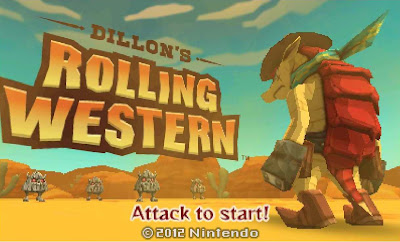 Games with a single genre is slowly becoming a thing of the past. Developers and publishers like to mix up things, such as this game called Dillon's Rolling Western for the Nintendo 3DS.

The game is a mix up between an action game and a tower-defense game. The Armadillo and squirrel buddies try to make a living by helping each town get rid of enemies called grocks (walking rocks) which infest the towns by eating their livelihood stock called scrogs (basically pigs).

There are ten different villages throughout the entire game. You will be spending 3 in-game days defending the village.

For each day, you'll be given ample time to explore, collect resources, and build defense gates. The sky will turn red as a sign that the enemy grocks will soon start appearing and then a second warning which will indicate that it's time to get ready to rumble.

The most important thing in the game is to not lose all the village scrogs or it's game over. You can do so by placing defense towers and engaging into fights as mentioned above. You will also need to collect special plants called Scruffles which will increase the number of Scrogs in the village.

The tower defense element of the game goes like this. Since enemies will be coming from different directions you need to build, upgrade or equip watch towers with weapons. The enemy grocks follow a trail which leads to the town gates (number depends on the level).

In more advanced levels, it's very easy to get overwhelemed by incoming grocks so it's a must to examine your surroundings, know where the grocks are coming from and where to get your resources.

The watch tower weapons have specific range and firing directions. It's basically part of your strategy which weapon to equip and which watch towers to equip.

The action elements of the game is defined with every enemy encounter. If you get close to a grock, you'll be taken to the battle screen where you'll be rolling a lot on enemies. Depending on how far you've progressed in the game, you'll be able to acquire different skill which can be upgraded. The skills upgrade system really makes Dillon's Rolling Western such as progressive game.

The cel shaded graphics is something that will surely get you impressed when you look at Screenshots.html. And that's true, the in-game graphics also works very well in 3D.

The character models look good, even enemy grocks can be easily distinguished apart from one another. Speaking if distinguishing grocks, there are 22 different types of grock that you'll encounter in the game. Some of the grocks are small and some are very gigantic.

The environment is vast, and gets bigger as you progress. While the environment generally makes ot feel like an open world, there are certain limitations like not being able to swim on water (Dillon is an Armadillo afterall). The environment feels western in every respect.

On the overworld, you'll notice that certain particle effects accompany Dillon every move he makes. Rolling and holding for a while shows some nice charging effect for example and hitting the break momentarily blows off dust around Dillon's body.

The controls feel a little akward at first. You can move around using the DPad and roll by sliding down the stylus downward and then releasing it. It's very easy to get acquainted with the controls though but those with short fingers might find it difficult to reach out certain buttons  or even interact with the touchscreen at the same time. Still, I can't think of any better way to do this so the developers might have thought this through and decided that it's the best control scheme for the game. 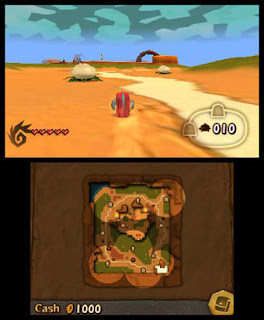 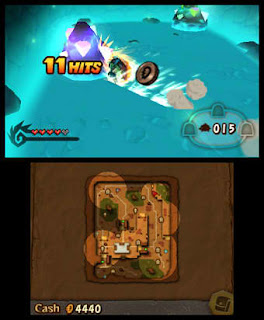 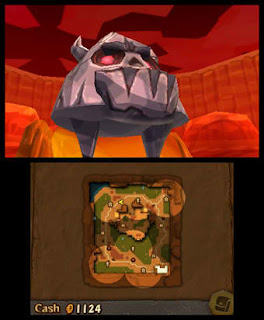 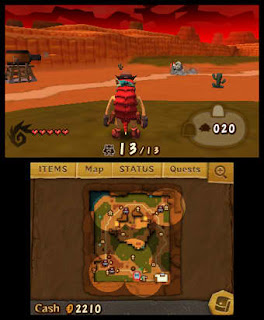 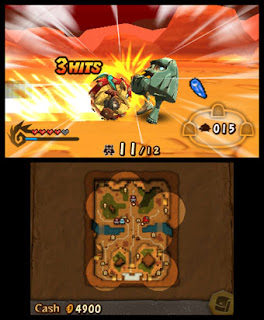 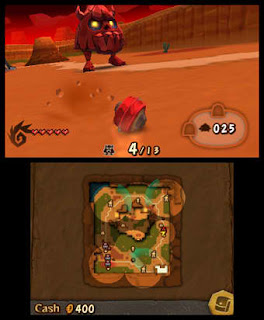 A small map is provided on the lower touchscreen. It can be zoomed in or out and can be very useful in telling your location,the location of your towers and the grocks's dens.

The music is Western in every way. The music is not in any way cheap, in fact, it makes the game feel like it had a full retail budget. Almost every action you make has a sound or at least tries to manipulate it in certain ways.

Dillon's Rolling Western is a perfect example of "gets better as you play more". There is good progression in the character and the story which will surely get you busy for a while and make you forget about the AAA retail games that come out. The game is available for $9.99 on the Nintendo eShop.