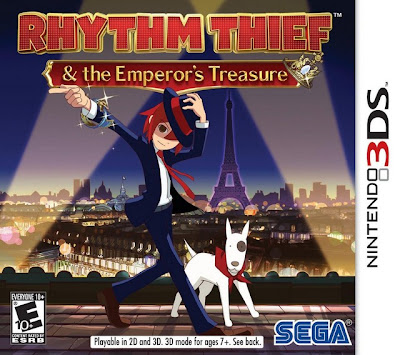 For someone who's tired of playing RPG's, FPS, Fighting games, etc., rhythm games can be quite a refreshing try. Luckily, SEGA recently launched the Rhythm Thief demo on the Nintendo eShop and here's our impressions.

You have 30 available credits before your demo runs dry. The game allows you to choose between three different modes (rhythm list) which are "Showtime", "Looting the Louvre", and "Battle Diabolique". Each mode features a unique music and control scheme. The US demo is somehow missing the r03 rooftop scene which is present on the Japanese demo (not sure for other regions).

Showtime features a control scheme that one would expect from a rhythm game. The hero comes on-stage with two other guys dressed in black and controlled by the computer. You basically just have to time when to slide on the touchscreen using your stylus or your finger on the correct direction. There's some sort of lifebar that you need to sustain or else it's game over. You can retry anytime you want though.

It took me only a couple of times before I got used to the controls and then I was stomping my feet and nodding my head to the beat.

You can choose to play with a guide on or off. I recommend playing with a guide first of course, but later you should try turning it off as it gives more thrill and fun. You'll also appreciate the animation and graphics more this way.

The second mode is like the first one but instead of sliding your stylus across the screen, you tap (touch). Looting the Louvre displays four different colored squares on the touchscreen panel. The objective is to reach point A to B while hiding from security guards. You basically run inside a museum, and you use your groovy skills to hide behind the the statues. All you have to do is tap the color that matches the color of the statue, with the right timing of course.

The last part of the Rhythm Thief demo, Battle Diabolique, doesn't use the touchscreen at all. Instead, you use the DPad and the A button to slap off enemies. A wave of enemies will come at you from two different directions, left or right and  you just need to perfectly time them. This is probably the most intense but with enough practice, this somehow becomes the easiest.

Once you've found a mode that you like, it become really hard to put down the 3DS until you get an A. You are scored by the number of perfect, great, good, harsh, and combo you make, depending on how accurately you've hit the stop. At the end of each performance you'll be ranked, and you'll also get some coins which doesn't have any use in the demo.

The 3D was good, although I had some trouble with it since there comes a lot of times when I had to move the 3DS from the proper viewing position. Because if this difficulty, I chose to turn off the 3D for the most time that I played. It's probably a good idea to play this game with a stand, but it's not necessary.

Playing each modes the second, third, or even fourth time around was still fun. Trust me, chances are you won't be able to perfect them on the first try. The full version will have about 50 songs in it, so just imagine the amount of fun in that.

Speaking of the songs in this game, there's some James Bond feel to it. For the most part, I feel like doing the moves myself instead of playing the game and letting the character do its job.

One of the best demos on the North American eShop so far! I was really satisfied and this game will really have to compete on the list of my next 3DS purchase. There's an extensive amount of content and the music from all the three modes was just great!

This is a game that will surely keep you busy for a while and I also get the impression that this will make a great travelling companion.

Rhythm Thief & the Emperor's Treasure is due for release this coming July 10, 2012 for the North American market (already released for JP, AU and EU).

Have you tried the demo? What was your favorite mode? Would it be part of your next purchase?