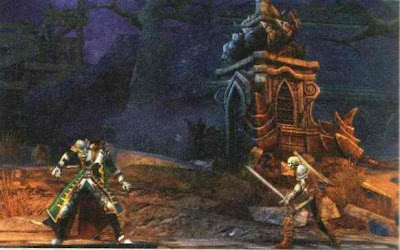 The latest version of Nintendo Power revealed that a new Castlevania game is indeed true for the Nintendo 3DS. Castlevania: Lords of Shadow - Mirror of Fate is a 3DS exclusive 2.5D game featuring a very familiar character from the series, Trevor Belmont.

While the game will resemble a gameplay similar to previous titles like Order Of Ecclesia, the environment would also shift to a full 3D environment from time to time. At first, Trevor will be fighting enemies using a weapon similar to Gabriel on the first game.

The plot takes you back 25 years after the Lords of Shadow. The game will take you on various points in time, strolling through Dracula's castle, and changing between four different characters including Simon Belmont.

Castlevania: Lords of Shadow - Mirror of Fate will be utilizing the 3DS's touchscreen functionality as well as Streetpass and Spotpass features.

Mirror of Fate is being developed by Mercury Steam, the same developer that worked on the first Lords of Shadow. Check back again for more updates on this game!
2 comments • Discuss in forums • Posted on Wednesday, May 30, 2012

wow. this is my most awaited game for the 3DS. I've been a very huge fan of the Castlevania DS series. I love the 2D side scrolling killing. :D

yes, it is quite an exciting title and we can't wait to get our hands dirty with it!