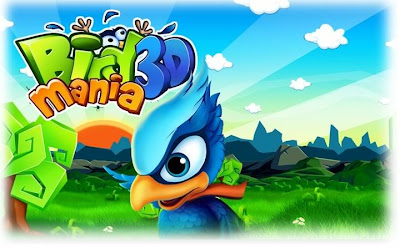 Stand aside Angry Birds! Nintendo's own bird game is now here... Well, it's not exactly Nintendo's but it's a game for Nintendo's 3DS handheld. Bird Mania 3D has just been released for the US Nintendo eShop.

Priced for a mere $1.99, is the cheapest game that entered the eShop market so far and it's a 3D game! We were actually expecting an Angry Birds type of game but it turned out rather different from what we first imagined.


Bird Mania 3D is basically about a bird named mojo who is after his friends on their way to Africa. The game is basically a side-scrolling game where you control the bird using the 3DS touchscreen with your stylus and move up and down to soar and glide while collecting bonuses and avoiding obstacles such as bees, birds and trees.

Bird Mania 3D boasts of 20 achievements and extra bonuses to unlock. The graphics are meticulously hand-drawn and supports 3D display.

The game is developed and published by Teyon. This might actually be the first eShop game that is ultimately made to kill your time! Don't forget to load up your eShop funds!