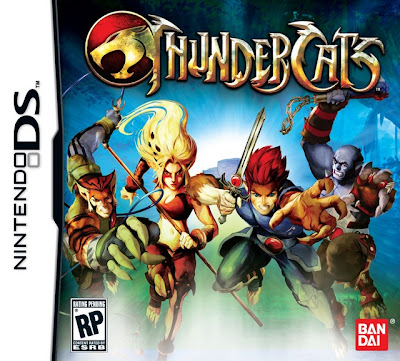 Namco Bandai Games surprisingly announced Thundercats for the Nintendo DS instead of the 3DS. The level of graphics for the game of course seem to fit the older handheld.

The game is being developed by Aspect, the same developer for Naruto: Ninja Council for the DS and Gameboy Advance. Aspect also developed Metal Gear Solid 3: Subsistence for the PlayStation 2.

The game will be a side-scrolling action platform. You will take the role of Liono, which is the main character in the series. There will be support characters which you can call to aid you in battle such as Tygra. Support characters will be available as you meet different characters throughout the game.

Thundercats for DS will be released sometime on August this year (2012). Thundercats is a 1985 TV cartoon series by Rankin-Bass Productions and then later by Warner Bros. The cartoon series revolves around a dying planet called Thundera, a powerful sword called the Sword of Omen, and the Thundercats (Liono, Cheetara, Panthro, Tygra, WilyKit and WilyKat, and Snarf).

Seems like a promising game to us! Did you watch Thundercats when you were young?
1 comment • Discuss in forums • Posted on Wednesday, April 18, 2012

wish to have a copy of this one soon. i remember we had a thundercats poster in my brothers room. :D :D :D