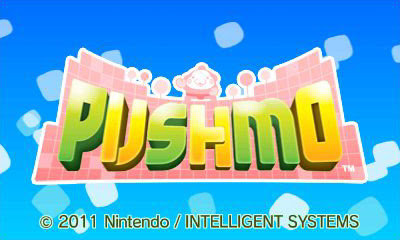 Welcome to the wonderful world of Pushmo! Otherwise called as Pullblox in Europe and Hikuosu in Japan. The game was released on December 2011 in the 3DS US eShop and quickly became one of the most popular games for the platform.

Papa Blox made a special park called the Pushmo Park where kids can push and pull blocks. Some rascal messed with the Pushmo blocks and trapped the kids in-between. Papa Blox, being too old asked you (Mallo, the cute red fella dressed in blue sumo underwear and yellow gloves) to rescue the kids.

Pushmo follows a very basic premise, you just need to reach the kid at the top. Well the kid is not always on top but is often placed on a difficult to reach and very high place. You can push and pull blocks either in front or on the side of the blocks. The blocks are color-coded, so you will need to think of a proper strategy on which colored block to push or pull and when to move them.

The levels offer a decent challenge, the first few worlds offer a very easy challenge to make you familiar with the game while some levels are really mind-twisting. The difficulty of each level is marked with a star, the more stars the more difficult a level is.


When you get stuck on a level, you can reset the blocks by stepping on the reset switch. Pressing the L button rewinds back and will undo all the action you've done, it even makes some cool rewinding graphical effect. Previously completed levels can be gone back to anytime you like.

Time has no factor on how well you do on each level, leaving the problem solving part of the game for each level a one-time thing. There is no other sense of achievement other than moving on to the next level.

Aside from being a puzzle game, Pushmo can also be treated as a platformer as you have to jump from one block to another in order to reach and rescue the child. You can of course also run around, and though it seems a little bit unnecessary, you can actually make the character walk slowly as if he's sneaking.

Pushmo has a very great character design that is very simplistic but cute. I won't be surprised if the main character adds up as another one of Nintendo's mascot. The game also has a great level design, the world camera is set on an isometric view by default, although it can be controlled to zoom-out in front using the R button and holding L + R buttons to pan. The background uses a cartoon style design such as round trees and light colored stones, windmills and grass.

The 3D depth can be adjusted during play, it's subtle, but it doesn't hurt the eyes even when set to maximum. The 3D gives a very good sense of depth although not in any way helping you solve the puzzles better.

The game makes complete use of all the inputs available on the 3DS. You just really got to appreciate all the effort they put into it. On the main menu for example, you can navigate by using the circle pad, the DPad or even the touchscreen controls.

One of the most addictive feature of the game is that ability to create your own Pushmo puzzles and share them with other people through AR Code. It's like creating a pixel art but are essentially placing blocks and making puzzles for other people to solve. They could've gone away without this feature but this really gives Pushmo a high replay value and makes the game worth every penny you put in it.

Over the Internet, you'll be able to find and search for different Pushmo QR Codes and most are accustomed to making popular characters such as Mario, Sonic, Mickey Mouse, Zelda, Pokemon, Batman, Castlevania, different kinds of anime, etc. The possibilities are endless and your imagination is the limit.

QR Codes can be scanned directly from your monitor, just point the 3DS camera to your screen and be sure to place the QR code in the middle of the centre box and it would be able to detect.

Other than sharing QR codes, there is no other wireless feature for the game. Out-of-the-box, Pushmo does not contain any StreetPass or Spotpass feature.

For a digital game, Pushmo is really packed with content and even offers some great music tracks during the game. It's definitely worth the $6.99 price tag that comes with it. This is definitely not a thing to miss on your collection of digital games from the Nintendo eShop and if you're looking for a puzzle game to kill your time with, get Pushmo. Don't forget to load up your eShop credits!