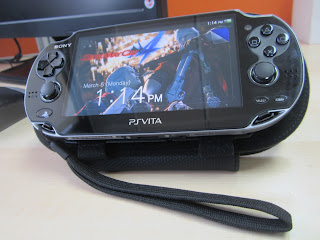 At last, we got our hands on the PS Vita and we have a lengthy story to tell! Are you ready? Brace yourself as we dive into Sony's latest gaming handheld. Full review after the jump!

The Vita is huge compared to its predecessor, the PSP. The large OLED display clearly makes a distinction the moment you set eyes on it. It's sleek, and very prone to smudges. Despite its massive look, the Vita is surprisingly light. I think it would fit fine on the average Asian hands and would also feel comfortable.


The screen is a 5-inch (16:9) OLED multi-touch capacitive touchscreen. The display is very bright, scaling at a 960 x 544 resolution, it's a little less in quality compared to the iPhone's retina display (you'll know why I said better below) but the larger screen and obviously better graphics makes up for it. There is no glare reduction which makes the Vita a little hard to use under direct sunlight.

The power button, volume, game cart slot and the accessory slot are all placed on top while the memory card slot at the bottom of the unit. You will have to peel with your fingernails if you want to change games (which is rather annoying) or pull out the memory card. The home button is located on the lower-left side of the gadget  and the start and select button on the other end. The start and select buttons are a little hard to press because they're almost leveled to the surface.


As you may have already heard, there are now two analog sticks placed on both ends of the handheld. When you turn the analog sticks, it slightly bends to an angle. The analog sticks are also a little elevated and a little far away from the surface, unlike with the PSP. I've played the game with Uncrharted: Golden Abyss and  the second analog stick is really useful for looking around the environment, something that the 3DS really need to improve on their next model (though they compensate right now with the slidepad).

There's a wide touchpad at the back, one of Sony's innovative piece with this device. The touchpad is designed with some hieroglyphic design which are actually PlayStation button symbols. For some games like Blazblue, the touchpad can be assigned a command. Beside the touchpad are two hand-rest (or should I say, finger-rest) docks. The triangle, square, x and circle buttons are also a little smaller than the PSP's, maybe making it more difficult for people with big fingers to touch. The new buttons also give more "click", but old-school button tricks such as clawing works fine. The DPad is very much improved, giving you more of a 360 degree feel and it's like you're just moving one piece unlike with the PSP where each direction is like a separate button. It gives me the impression that the Vita would be a good fit for fighting games.


On to the User Interface... You might have heard that Sony have replaced their proprietary XMB (Cross Menu Bar) with the new PS Vita proprietary UI called LiveArea. LiveArea is sleek, icons are placed alternately at the top and the bottom of the screen, side-by-side and can be re-arranged according to your liking. The icons are also grouped on panels which you can scroll vertically. Each panel can be customized to have its own wallpaper which is really cool.

Games and applications can be launched with a touch of your finger. When you swipe horizontally, you'll be able to browse through open games or applications. To close a running app, simply peel from top-right to bottom-left as you would peel as sticker. Unfortunately for those with sweaty hands or just don't like navigating using the touch screen, the physical buttons can't be used to move around. I'm not sure if it's possible to improve this through a firmware update.


On to the game graphics, I actually tried with two full games and two PSN games. Uncharted: Golden Abyss is  basically a full game, and I think it's a decent benchmark for the PS Vita's power. It actually run smooth, and makes very good use of the controls. However, you will immediately notice that the Vita is not really on par with the PS3. It could be that it's around 80 to 90% as good as the PS3 but definitely not on par. 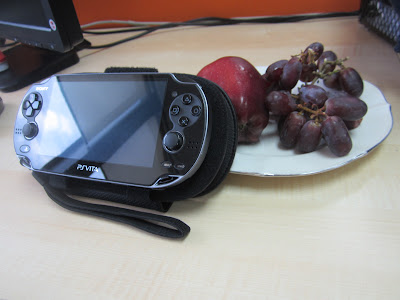 I can't help but notice the jagged lines while playing Uncharted: Golden Abyss, I almost compared it with the 3DS's Resident Evil: Revelations in terms of quality (and I expected more of the Vita). It's perfect however when playing 2D Games such as Rayman: Origins. Not only that it runs at a smooth 60Fps, you also get some added features such as zooming in and out the screen and still get ultra crisp 2D graphics. I'm not surprised that an anime-inspired game such as Gravity Daze (which is a cel-shaded 3D) actually looks so good with the Vita.

There are built-in speakers placed in front of the handheld which is perfect in my opinion. A standard 3.5 mm headphone (or ear phone) would work well with the Vita and a provision is placed below the unit which is good. The Vita also have a built-in microphone, but since I haven't used it much I wouldn't say much about it for now.

The front and back cameras are quite decent, from the PS Vita's OLED screen everything looks sharp. However, it's not the best camera out there and quality could probably be easily replaced by two or three year-old mobile phone. I would say it's sufficient in most cases and there are already games that utilizes it.

The Vita allows you to manage your photos in several ways such as arranging your photos by month. You can also take Screenshots.html of a game (depending on the game if supported) by pressing the home button and the start button.


The Vita Wi-Fi supports the 802.11 b, g and n IEEE standards. There's no physical button to turn on or off the feature as it's fully configurable through software. The Wi-Fi also automatically detects if there's a nearby hotspot.

There is one little annoyance with the Vita's Wi-Fi feature. Unless you have a service running that makes use of the Internet, it will disconnect from the access point. This is annoying if you're connecting to a tethered connection such as the iPhone's for example. You have to go back to your phone and switch the tethering on again, launch an app in the Vita that makes use of the Internet.

The browser interface has some really cool design. It's also a big convenience being able to touch on the screen directly to zoom in or out. However, the PS Vita's browser suffers the same caveat as the 3DS's web browser. For example, the websites you visit doesn't load its content one-time. Parts of the page buffers (a geeky term for loads again) even after you finish loading the whole page. It even becomes worse when you try to zoom in our out as white flashes cover the screen. The Vita's browser does a step ahead with its multi-browser feature though. At the moment, it lacks some copy-and-paste features.


One of the things that made the Vita such an exciting device are the Social features. The Vita showcases several social apps out-of-the-box.

The party app allows you to chat (type-chat and voice chat) and play games with other PS Vita players over the Internet. You can either create a party and have people join you or join other people's party. As a party-owner, you can select who can join the party such as friends of your friends or select players.

This feature is similar to the 3DS's Streetpass in a sense. You don't get to change avatars but you can share information about the games that you're playing as well as sharing game items. To use Near, you need to sign-up for a PlayStation Network account. The availability of this feature varies for some region (it may not be available), age of the PSN Account user, location data (if set), and other settings. You can also control the amount of information you share over Near such as your online ID, and games you play.

As the name implies, you can message a person or group of people with this feature. This works for either Vita or PS3 users. You can also receive PSN notifications and send game invites using this.

Similar to the 3DS's "friends list" app, you can exchange PSN usernames here. The system works like a typical instant messaging system where you'll just have to enter another user's username and that other person will get a notification.

Trophies you collect in any game are automatically synced once you launch this application. You can also view all the trophies you've collected and some information on how to obtain them here. Additionally, you can browse through your friend's trophy list if they chose to share them


The game card is about the size of an SD Card. However, coming from old, traditional gaming lifestyle I quickly noticed that there's hardly any design on the cartridge. Publishers are either lazy nowadays, or there's not enough room for a good design to fit in.

The Vita is currently priced at $250.00. In addition to that is the price of the memory card, which is proprietary to Sony at the moment. It may take a while for third-party and cheaper brands to appear (if there would be at all) and this add to the cost of owning a Vita. It's just a one-time investment though... But it sucks to know that your PSN account is tied to your memory card. Blah!


The PS Vita is one hell of a monster. It's been designed to give the best immersive gaming experience on the go. There are a lot of possibilities that game publishers could explore and there's plenty of things for players to do. The multimedia features are there, but not enough to replace your iPad or Android tablet. Still, the PS Vita is undeniably the most advanced handheld gaming device out there and we're very curious about how publishers plan to make the most out of it.
Be the first to comment • Discuss in forums • Posted on Monday, March 5, 2012