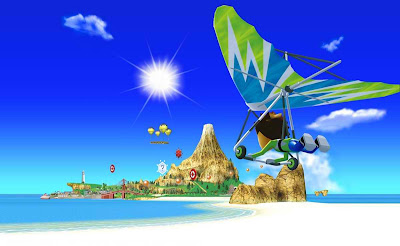 The game that span over two Nintendo console generations now makes it way to the 3DS! Fly high into the sky with Pilotwings Resort and take your Mii into a journey above Wuhu Island.

Pilotwings finds its humble beginnings back in the SNES (Super Nintendo) days. It also had a sequel for the N64 and now for the 3DS. The 3DS versions allows you to use one of your Mii (or Mii's you've met through streetpass) as the primary character in the game and ride different aircrafts. You'll get to apply for a virtual (in-game) license and put your signature in it for a more personalized feel.

The whole adventure in Pilotwings Resort takes place in Wuhu island, which is the only level that you'll be able to explore in the entire game. It seems a little small from the start but the experience actually changes when you start from different places in the game and when riding different aircrafts.


In order to progress in the game, you will have to take on different missions. The game is divided into five classes which are Training, Bronze, Silver, Gold, and Platinum respectively and you will have to obtain the minimum number of star (which is essentially getting as many three stars as possible) in order to get to the other class. Each class in Pilotwings Resort is consists of a minimum of six missions and max of nine. Each mission sets a different kind of challenge, you will also be required to ride an aircraft suited for that mission (the aircraft is chosen for you).

The graphics is essentially simple, with smooth animation frame running at 60Fps with or without the 3D on. However the level of detail is kept to a minimum like the grasses for example is just a bunch of textured plain and some trees look like card boards. The technique works good though for the water as it looks very realistic, same goes for the background during evening flies. And before I forgot to mention, you can fly on three different times of the day (daytime, evening, night) and you can see the settings dramatically change with this feature.

I felt like the camera was a little restricted, how I wish that the 3DS Circle Pad Add-On was supported and available during this time. However, Pilotwings Resort was one of the earliest games released for the 3DS and can be forgiven on that regard. There are ways to control the camera though it's just not that good.

While I find the world overall beautiful, I felt like there was a lack of moving objects in the game. Probably because this was one of the first games that was made for the 3DS and the frame rate could significantly drop when in 3D. That's just my speculation though... Still, the environment is good and sometimes relaxing to look at.


Oh, and of course one of the most important aspects of this game, the 3D. The 3D can be adjusted to a level that suits you. Don't expect a pop-out effect because you'd be disappointed. It's more of a "looking inside" thing. If you want the best 3D experience, you can achieve it through the camera controls available when you ride a Plane. Using a plane, you can switch to first-person mode or even to a birds-eye view. It's the best experience I've had in the game. Unfortunately, you can't have the best of both worlds as it's hard to focus on the 3D and mind the mission at the same time.

Pilotwings Resort uses the lower touch screen as map. The touch screen also finds good use for navigating on the menu and I find it very convenient to use in every way. I'm very glad that the developers did not entirely rely on the touchscreen though for this purpose and still supported the use of physical buttons to navigate on the menu. The controls are geared to each aircraft and that is fine. However, I still wish that there was an aircraft that supported gyroscopic controls.

During or after you finish the game, you can take on a free flight mode. The free flight mode allows you to more freely explore the island at a limited time. It's only through this mode that you can unlock dioramas (sort of collectable figures) by collecting stunt rings, Mii trophies, and gold rings. Collecting dioramas can be a pretty good distraction when you're getting frustrated on missions.

Pilotwings Resort is a good game for those who want to take a time-out from intense and serious plotted games. It's also not bad for a first 3DS game. However, it quickly felt like the content is really lacking and only being able to explore just one place makes the game feel repetitive even with the different variations available. Another missing ingredient is online play. Heck, even an online leaderboard could've made the game more interesting. Still a decent game with good music, but it's far from perfect.