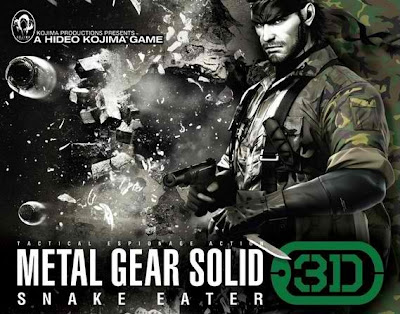 Solid Snake is back with a vengeance on Metal Gear Solid: Snake Eater 3D. Here's a hands-on impression on the game demo that came out on the Nintendo 3DS eShop last week.

Metal Gear Solid: Snake Eater 3D is the third demo that came out of the Nintendo 3DS eShop this year. It's part of Nintendo's smart move to boost up sales and we both know that everyone's happy with that.

You start off in the forest where the full game also starts. Your objective is clearly given, the demo also states early about the limitations of the demo.

If you turn the 3D at any point in the game, you will notice that Snake really stands out from the background. Something that is hard to distinguish back in the PS2 version, the 3DS version soothes my eyes better. Even the cinematics are in 3D and used effectively.

The map being available on the lower screen is so much help. Combine that with the new ability to rotate the camera on all angles and it becomes a totally better experience. New in Metal Gear Solid: Snake Eater 3D is the ability to crouch-walk, increasing the ability to stealthy sneak on your opponents. Walking while aiming puts you in third-person mode, the demo only allowed to shoot on that perspective. The only caveat in aiming in third-person is that Snake doesn't move his shoulders while in this pose which in turn makes it look like he's floating in the air. I hope that is something that is fixed on the full version (bad news, some say they did not).


I don't particularly like the gyroscopic support for balancing, it makes things harder than enjoyable. When on a tree for example, it's impossible to keep balance while playing and laying down on the bed.

As for the touchscreen support, I would say that the 3DS's dual screen has effectively been used in this game. All the game indicators are placed on the lower screen, leaving the upper screen totally focused on actual game graphics. Thus, a full Tactical Espionage experience.

Another thing that makes the game easier to play are the captions. When leaning on a wall for example, a caption showing how to knock on the wall is shown on the screen.  It's also very easy to toggle weapons and item using the right and left DPad buttons respectively.

Mind you that this is an M-Rated game... But to lessen the violence involved, you can turn off blood effects if it would help. But again, there are things in the game more violent than blood.

I can't speak so much about the character model (Snake himself). It seems to have been enhanced, his face seems sharper. But I doubt that it uses the 3DS's full potential because the model isn't as high quality as Jill Valentine's in Resident Evil: Revelations. Also, unfortunately for the demo version the photo camouflage wasn't enabled so there was no way to try it out.

By the time this article is published, the full game might already be out in the market. If you never tried Snake Eater on the PS2 or the PS3 HD Collection before, you'd enjoy playing on the 3DS. For old-time players, you will find Metal Gear Solid: Snake Eater 3D for 3DS a brand new experience.
Be the first to comment • Discuss in forums • Posted on Tuesday, February 21, 2012