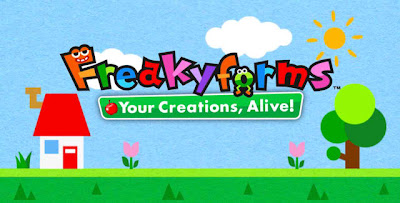 So how do you get started in this game? Freakyforms has a helpful tutorial that would get you to create your very first creation. You create your creatures by putting together different parts and shapes. The basic features that you could put together are the head, eyes, nose, mouth, body, arms and feet. Later on in the game, you can unlock other body parts and you squeeze more of your creative juices.

Once you've created a Formee (as it's formally called in the game), you're ready to explore world. Since not all features as available by default (such as the ability to scan friend QR Codes), you'll have to unlock such features by taking on challenges. Sample challenges are breaking hidden blocks, making a delivery, collecting gems, etc.

You control your Formee by using the 3DS touchscreen. There's a big round shape at the center of the bottom screen which basically serves as a guide on where you should tap to make your Formee move or drag to make your Formee jump. Basic movements you can do are walk, run, jump, and swim. If you happen to progress far enough in the game, you'll be able to get some wing body part and you can make a Formee fly.

For every five Formees that you create you can make your world expand. Every world you unlock start up bare, monochromatic and unlively. You'll have to keep exploring and unlock treasure chests to improve your scenery. The scenery (the world) is of course customizable to certain extents.

If you're not in the mood to create new characters, you can always explore and unlock built-in characters which you can buy through the shop. You will need to collect coins as they come for a price, buy they're very cheap so it won't be much of a problem.

You will fall in love with the music, Nintendo has been very good at this ever since the NES days right? Freakyforms music is no exception and it will play in your mind over and over again even when you're not playing the game.

Freakyforms is exclusive for the Nintendo 3DS. For $6.99 you will get a content packed game that is so much fun to play and will eat away your time creating your own creatures. Sure, there are some limitations in creating more detailed characters but it's up to you to be resourceful anyway and be more creative. Freakyforms was launched on November 10, 2011.