Super Mario 3D Land Is Out! 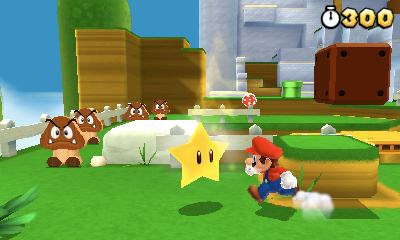 A storm blows off the mushroom kingdom and things called super leaves has been spread all over the place. Well, you go on the usual routine of saving the princess of course but with a different experience!

Meet the cast of both new and familiar characters such as Mario himself, Princess Peach, Toad, Bowser and his kids Boom Boom and Pom Pom, the wild Piranha Plant, the scary ghost Tail Boo, Tail Bullet Bill, Goomba, and the Parabiddybuds.

The Super Leaf powerup will pose up a familiar feeling to old time gamers. It's identical to Super Mario 3's leaf power up that allows Mario to turn into his Tanooki Mario suit. In this mode, you'll be able to do the tailspin move as well as gently float down when you jump.

Another highlight in this game is the Boomerang Flower which turns Mario into a blue-turtle shell sort of thing or otherwise called as Boomerang Mario. Other power ups brought from the old Mario games are the Super Mushroom, Fire Flower and Super Star.

You can buy Super Mario 3D Land from PlayAsia.
Be the first to comment • Discuss in forums • Posted on Sunday, November 13, 2011