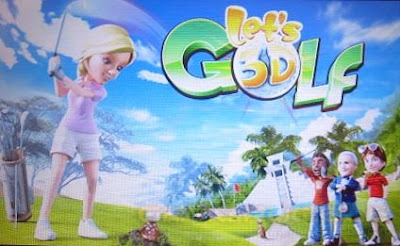 I don't usually like Golf games... Unless they come with cute characters and special moves, and in 3D! That's what Let's Golf 3D for 3DS is!

The game was first made available through mobile devices such as the iPhone and Android phones. It was even ported to the PSP, and now we have it on the Nintendo 3DS through the Nintendo eShop.

The graphics isn't much to expect, but the sharpness, shading and level of detail was nevertheless beyond my expectations. You move in a very wide environment, everything such as the grasses, trees, animals and even the water is so full of life. 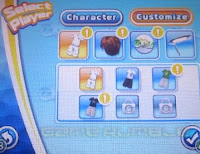 The 3D Effect is very good in this game. Like when you're standing next to an animal (like a cow) or tree, the 3D becomes really obvious. I know that this is far from utilizing the 3DS's full capabilities, but I was satisfied with the graphics nevertheless.

There are several modes available to you in single player mode like instant play, career mode, challenge mode and free hole. I  played more with the career mode as it seems to be the most interesting, collecting medals and playing through six different courses.

There are eight  characters in the game, but only two are available and you have to unlock the rest of the characters. Each character have their unique stats as well as special moves.

The basic control involves two actions, setting the power of your swing and then the accuracy. Two crossed bars can be seen on the upper-left screen for this. It basically involves timing.

Before hitting the ball, you can check on the trajectory. Two buttons allow you to move back and forth, following the trajectory of the ball before you hit it, so you can make sure that you're landing on a good spot. When your shot lands the ball only a few inches away from the hole, then there's not need to spend any extra effort as there is an auto-put feature.

The game has a very good use of the touch controls from selecting options on the menu to the actual game itself. Depending on your preference though, there is very little need to use the touch controls as you can navigate around using the physical buttons anyway. 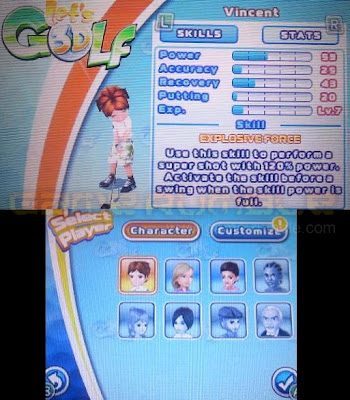 Unfortunately there is no online mode in this game. However, there is a two player mode but it does not support wireless play. Instead, you and your playmate will have to share the same Nintendo 3DS and switch turns.

I really enjoyed playing this game. It's definitely worth your $7. I shouldn't forget to mention that the game has a beautifully composed soundtrack which really makes this game complete and a really solid addition to the Nintendo eShop library of 3D games.

Be the first to comment • Discuss in forums • Posted on Wednesday, November 9, 2011