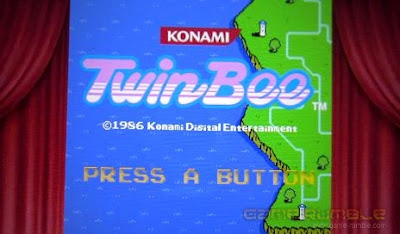 3D Classics TwinBee is the fourth installment in the 3D Classics Series. It's a classic vertical shooter from Konami that was published back in 1986 (only in Japan).

You play as a ship that looks like a bee with two hands. Like 3D Classics Xevious, you have two forms of attack. You can shoot air missiles using the Y button and ground bombs using the B Button (please don't ask me why they're both round and colored pink). However, some very small things totally made this game a lot better than Xevious (at least for me) and that is it allows you to get powerups. 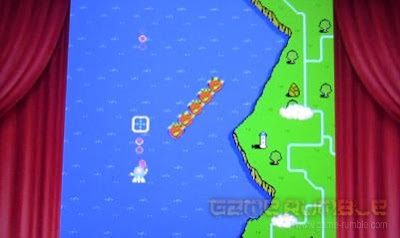 To get powerups in 3D Classics TwinBee, you have to shoot bells and time the exact color that you want and get that. Hitting the bell until it becomes color blue for example makes you faster (speed up), while other colors give you to ability to get a double shot, shield, etc.

The enemies are very hilarious! If you haven't noticed, they are either food or things you see in the kitchen. At the end of every stage, you will encounter a boss. Each boss is unique, something that is not present in Xevious or even better than my other favorite shooter from Konami, Gradius. 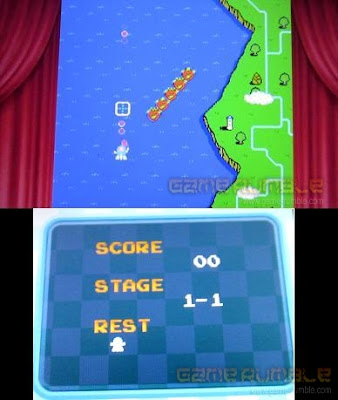 While I find 3D Classics TwinBee the weakest of the four 3D Classics so far when it comes to depth and prominence of the 3D effect, its classic nature of being so colorful and wonderful design somehow makes up for its shortcomings. If I have to describe my experience, the red curtains on the side makes you feel like you're looking inside. It's really more like the red curtains make the 3d illusion depth. The depth is of course adjustable in the options menu before you start the game.

The gameplay is definitely the best compared to the first 3 titles, but they've taken out the two player mode which could have made a cool wireless or online play. So yeah, there's only a single player mode.

Overall, I really enjoyed the game and I've been playing it over and over again compared to most eShop games that I've purchased. 3d Classics TwinBee is available for $4.99 through the Nintendo eShop. You might need a Nintendo 3DS Prepaid Card in order purchase the game.