The Legend Of Zelda Four Swords (3DS) Due September 28th 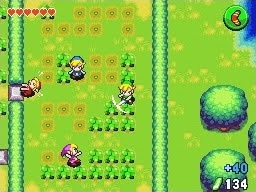 The Legend Of Zelda Four Swords will be coming to the Nintendo 3DS and Nintendo DSi/DSi XL on September 28. And here's the big thing... It's for FREE!

Yes, it was actually mentioned in the Nintendo video available through the Nintendo eShop. The game will have single player mode, as well as wireless multiplayer mode (no online, sorry). Once the game has been released on September 28, 2011, it will be available for free until February 20, 2012.

Why are they making The Legend Of Zelda Four Swords for free? Well, it's part of the Legend Of Zelda 25th year anniversary celebration. Four swords started as a Nintendo Gamecube game released back in 2004 and it was originally called Four Swords Adventure. It featured a multiplayer support since the gamecube supported plugging in four controllers. Four Swords also had a GBA release.

Since this is also being released for the DSi and DSi XL, we can't really expect too much about the graphics (and don't expect 3D at all). From the Screenshots.html and video, it looks comparable to Minish Cap. But since it's for free... I love free! Just keep them coming Nintendo!
1 comment • Discuss in forums • Posted on Thursday, September 15, 2011

"The game will have single player mode." - this is good news!! Free? WOW!