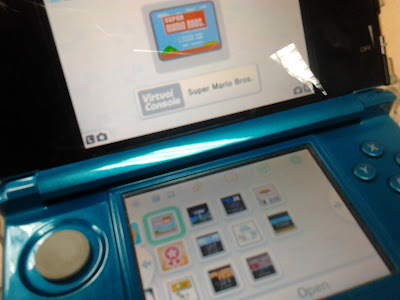 Nintendo fulfilled their promise for early 3DS Adapters a day earlier. Yesterday (August 31, Manila), I was able to download my 10 Free 3DS NES games from the Nintendo eShop.

I felt very pleased as I download each game. Every time I finish downloading one, I feel more excited going to the next game to download.

I was hoping that the NES games would actually occupy the whole screen. However, as it turns out it seems to have the the old Nintendo DS resolution. I first played the classic Super Mario Bros, Zelda, then a couple of others that I haven't played before. Below are the list of NES games that we got.
If you're a qualified Nintendo 3DS Ambassador, here's how to download the Free 3DS NES Games.
And that's it! Also, don't forget to download the Ambassador Certificate app to receive future updates. If you're having problems, it's probably due to the high volume of traffic that Nintendo is receiving right now (assuming you visited the eShop before August 11, 2011). Up next, the 10 free GBA games before the end of 2011!
1 comment • Discuss in forums • Posted on Thursday, September 1, 2011