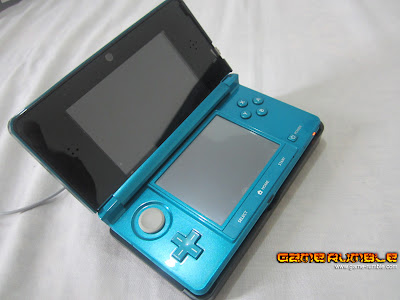 Finally, the time has come for a new console review! The Nintendo 3DS is the latest portable console from Nintendo. The Nintendo 3DS boasts of its new unique feature, 3D gaming without the need for special glasses! Aside from its new look,  most of the previous Nintendo DS features such as the touch screen, cartridge size and of course, its dual screen has been retained. Your full Nintendo 3DS Review after the jump!

At first, I was actually very skeptic about this console... First and foremost, it tries out something that has never been tried before (i.e. glassless 3D Gaming).

I'm quite sure that everyone adore Nintendo's jump over uncharted waters, but we also want to get the most value for our money. The PS Vita is about six months away, and me being away mostly for work traveling (commuting), I couldn't wait for it to come out before I could decide.

Glassless 3D Gaming - The most obvious feature is the new 3D gaming (without the need for special glasses) capability. I've first tried this game with Super Street Fighter IV 3D Edition. If you've ever seen a holographic picture, the Nintendo 3DS 3D features is just a little more than that.

The 3D Depth can be adjusted, and sometimes your character (and everything else in the game) would look like it's inside the screen. Pretty much just like the 3D that we now see in 3D movies while wearing glasses, and sometimes things like a character's hand seem to pop out of the screen.

You can play 3D without the need for special glasses and that's really cool. Like I said, the 3D depth can be adjusted and I always tend to keep it as low as possible (with the 3D still being obvious that is)... This is because I get cross-eyed. Nintendo and game producers issue a health advisory that adults should rest for every 30 minutes of play. The 3D feature is also not meant to be played by children below 6 years old, as it could pose a serious health risk. That said, I think the manual also says something about your viewing distance. I seem to fully enjoy the 3D at full when I'm about 12 inches (1 foot) away from the screen.


I find myself turning on and off the 3D feature once in a while... I would say that I keep it off for most of my "serious" gaming time such as when I play online. It's not because the 3D feature causes any lag (it doesn't), it's just that it helps me to focus. Like I said, I like to turn it on once in a while to get fascinated... But not something that I would keep for long (especially when my eyes are already tired). I'm not sure how this would fair with adventure games such as zelda ocarina of time.

Dual Screen - Unlike its predecessor, the 3DS uses a wide-screen on its top and that's where most of the cool things happen in the game. The top screen supports an 800 x 240 resolution for each eye which creates a high-quality 3D effect. The lower screen gets a lot less, 320 x 240. One thing we didn't like about the current design is that the bottom screen leaves smudges on the top screen! Be sure to buy a 3DS Screen protector.

Street Pass - Automatically detect if there are 3DS users near you... You can create your own Mii, and if you ever bump into another 3DS user along the way then their Mii would appear on your Mii Plaza (a built-in app) and your Mii would also appear on theirs. Well, since there's not a lot of 3DS users in my area yet... It has been pretty lonely and have yet to use this feature much. There are some cool things that you could do with your Mii though... You can save your Mii as a QR code or scan other's QR code to instantly create a Mii.

Built-in Camera - The 3DS has both a frontal and back camera. The back camera is capable of taking 3D photos, which you can view also using a 3DS. We're in the process of finding out if it's possible to view the 3D photos outside of the system but if you explore the SD card, you'll see that it creates the photo file and another photo file which I assume is the 3D data (so there are 2 files). The camera resolution isn't really nearly as good as modern point and shoot digicams and most mobile phones would probably even have a better resolution.

Motion Sensor and Gyro Sensor - Haven't really tried this on a real game (will update this section once I have), but there sure are there. I know because the game coins that I use to play one of the built-in games called Find Mii is using the game coins, and you can earn game coins by taking your Nintendo 3DS with you whenever you walk. I also heard that in some games like Dead Or Alive Dimensions

, the title screen adjusts when you tilt the handheld.

Microphone - Another feature I've yet to use... Well, since there is no built-in game or application that could actually utilize this hardware out of the box. I haven't confirmed this fact, but if you want to find out where the microphone is they say that it's the tiny hole underneath the start button.

Dock Charger - The 3DS comes with a Docking charger peripheral, which is quite useful if you want your portable to rest on a table while you're doing something on your computer for example. Unfortunately, it also requires your AC adapter.

AR Cards - The 3DS comes with AR cards that you can use with the 3DS's built-in game (an AR Game). Using the Nintendo 3DS camera, placing an AR card on top of a table pops out a 3D Model and lets you play a game. Other built-in games include Face Raiders and Find Mii. There are 6 AR cards that come with the game, they include a question mark card that is required to start playing, a Mario card, Link, Kirby, Samus (Metroid) and Pinkmin.

Backwards Compatibility - Good news for those shifting from the DS to the 3DS as you'll still be able to play your old games! (Note: not everything might work. I heard that GBA games are no longer supported. Please visit the nintendo support website for more info).

The 3DS currently has two official colors, cosmo black and aqua blue. The build is slightly narrower than its predecessor but I find it a little bulkier (in terms of height). However despite its metallic look, it was quite light and easy to hold. I also find the 3DS very easy to play with during a ride on the train compared to the PSP, perhaps because you can adjust the upper screen to an angle that you're comfortable with.

I must commend the placement of the headphone jack at the bottom, it was not intrusive during play. The power button is placed at the back part, which is also allows you to freely move around while charging your 3DS.

The 3DS follows the same layout as its predecessor... Well, almost. The only new thing really when it comes to actual game controls is the analog nub. The lower screen is reserved for the touchscreen control as it used to be, but I actually liked that it was quite responsive. The DPad is quite crisp, and it was very friendly for playing fighting games like Super Street Fighter 4 3D.

I would guess that the analog nub would be helpful in playing first-person shooter games or perhaps even third-person games such as Resident Evil. I've yet to try the 3DS on those kind of games, but the analog nub seems to be pretty durable and there's a carved circle around it which I guess prevents the nub from getting over-stretched and broken. And again, the circle pad also smudges the top screen...

There are very few selection for games right now and the only solid titles that I really like so far. I'm a little disappointed that I sometimes seem to see PS2 quality-like graphics and I've really grown allergic to that since the 3DS in my own perception should surpass the Nintendo Wii graphics.

Right now, the number of third-party games is off with a slow start... But I'm anticipating (i.e. hoping) a number of good releases during the next few months to come. Perhaps publishers would realize that 3D gaming has a very good potential.

So far, the list of games that I could recommend are:
Some of the good 3ds upcoming games that I anticipate are:
Don't forget that you can also buy downloadable games from the Nintendo eShop, including some remakes of the classic games such as Excite Bike 3D and Pokedex 3D.

Overall, I don't regret getting a 3DS even before the PS Vita comes out. It's fun to get amused by the 3D feature every once in a while, and the graphics is still very good even without the 3D. It's a whole new experience that Nintendo brought with the 3DS, and for that I must always commend them for their innovation.
1 comment • Discuss in forums • Posted on Saturday, June 25, 2011

I saw a friend playing with his 3DS. I think it looks cool. I could be getting one next month!