Talking Point: Nintendo 3DS vs Sony NGP — Which Will Be A Better Buy? 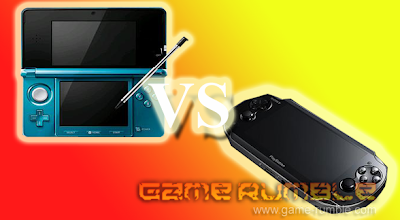 The Nintendo 3DS will released a few days from now... Have  you decided if you're going to buy it yet? We'll tell you the truth... We haven't... Well for several reasons, it's kind of hard to decided whether to wait for the Sony NGP or go all out with the 3DS.

In this Nintendo 3DS vs Sony NGP article, we will take a look at some aspects that could help us determine whether to buy the 3DS or wait for the NGP.

Price - The 3DS is currently priced at about $250, while the NGP is rumored to cost around $300 to $350. That's quite a difference in price. But if you're making an investment on an entertainment gadget for the entire, the $50 or $100 difference might be trivial. Winner - Nintendo 3DS

Graphics - The 3DS Screenshots.html show that the graphics is far superior than previous generation consoles such as the PS2, PSP, Nintendo 64, DS, etc. The 3DS is also almost as good as current generation consoles such as the PS3 and Xbox 360... We can see this in the Street Fighter IV demos. The NGP would surely be as good, and could even equal with the PS3's power, made portable. Both are promising some high-quality graphics never before seen in a portable gaming platform. Winner - It's a tie!

Features -The 3DS obviously features 3D gaming without the use of special hardware or goggles. While this is a really cool feature, we've heard that this could also shorten the 3DS's battery life... Also, I tend to don't like watching 3D in cinemas, which makes me think if the 3D feature is something I would leave turned off after a while. Both portables will have a built-in gyroscope, which mean you can tilt left and right. The NGP has some extra hardware feature but not in terms of visuals but the things you can touch such as touch pads on the back of the unit and 2 analog sticks. Both consoles have a touchscreen capability. Winner - Nintendo 3DS by a small margin

Games - Below are the list of top 10 games courtesy of gamefaqs.com. You decide if these games are something you would like to play. The PlayStation series has been a good call for me before because of a number of series that I follow such as Metal Gear and Final Fantasy).

We think that when it comes to games, the Sony NGP by a small margin.

Game Price - You could be buying a cheaper gaming portable but it's pointless if the game prices are high. Let's examine the options available for us... Both the Nintendo 3DS and Sony NGP have downloadable and tangible (physical) game media. The Nintendo 3DS games are approximately $45 based on play-asia prices and could even go as high as $65 for some games. It is very likely that the NGP prices could be the same or higher but definitely not lower than 3DS game prices.

This comparison was made with a lot of unsure things about the NGP, and the Nintendo 3DS just came out... I believe that while the features would matter during the first 2 to 3 years of the 3DS vs NGP Battle, in the long run it would still be up to the solid line up of games that would declare which portable game console is the winner.
5 comments • Discuss in forums • Posted on Saturday, April 16, 2011

I agree, for me, it's the games (especially exclusive ones) that make a console/handheld reign.

I actually believe the ngp will reign supreme for several reasons. The main reason being Sony's line up of games, which I usually prefer over Nintendo's. One of the other reasons is the timing of release. While the 3DS is cheaper than the NGP's said price range, the holiday season release date will make up for it and will help it sell like the hot new tech that it is, making the online game community stronger.... Come vote on my blog for best COD title and tell us why. www.vgpolls.blogspot.com

tozoot = The Legend Of Zelda Ocarina Of Time :) Got me puzzled there for a moment.

The PS Vita (a.k.a NGP) stand for Nintendo got pwnd!!!!!!! The PS Vita is going to OWN THE 3DS. And besides, the NGP (with WiFi) will only cost 249$, the same as the 3DS, but the NGP (with WiFi and 3G) will cost 299$. And second, the games for every playstation till now is amazzing. You even getsome really good game for PS2, EVEN NOW, that basically means that the PS will have more and longer support. The PS Vita can also connect to PS3 and you can also play multiplayer games with PS3 player, which will drastically increase the NGP multiplayer opponents. And lastly Nintendo seemed pretty desperate to release their system while Sony is taking their time fine-tuning it and releasing it during the holiday season, which will atract 10000s of more customers. I'm getting my piece of heaven, what about you?