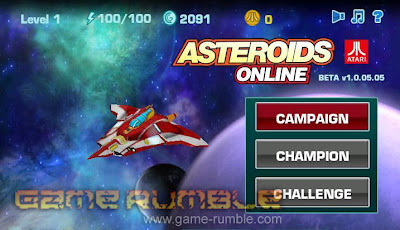 Atari Asteroids has made a come back with asteroids online facebook game. You will need Unity Web Player to install the game (it's like flash) and then get ready to enjoy wrecking up some asteroids. 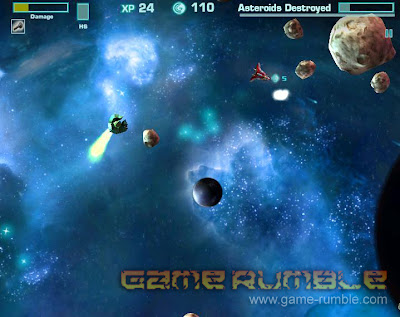 The scope of this asteroids online review is only with the "campaign mode" as it's the only mode that is available as of this time. A few years ago I could only remember asteroids with some triangle drawn on the middle that shoots bullets on asteroids that were only drawn on white lines. But right now, there are a lot of  new things added to the game elements such as thrusting (moving forward), and being able to teleport (hyperspace mode). You can go into hyperspace mode by pressing the "V" button. You'll notice that when you go into hyperspace, the asteroids get suck up in the vortex that you create (but they don't disappear). 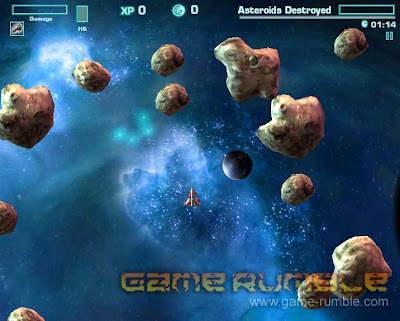 This is really a big leap from the classic asteroids game, the graphics was just really impressive. Your ship and the asteroids are in somewhat 3-dimensional look and there are planets that float around on the background.

To make the game more fun and exciting, Atari put in some interesting new elements such as being able to upgrade your ship and weapon. You can customize your ship, a leveling up feature is also supported. To level up in asteroids online, you simply need to destroy more asteroids and alien ships. 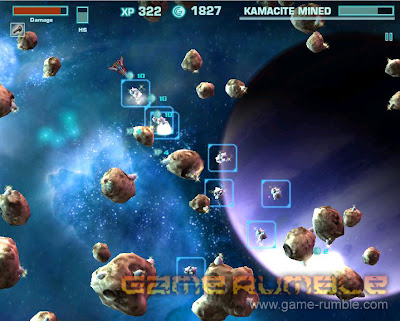 For each mission you need to spend some amount of energy. You can always repeat a mission that you have already completed to gain experience or to earn more money. Later in the game as you complete more missions, you will be able to explore other star systems.

Be ready to bite your fingernails as the difficulty is quite high, especially as you advance to harder levels. But I think this kind of difficulty is required in order to keep the player challenged. By the way, it's worth mentioning that different waves of enemy are setup in the game unlike the classic version where it was just all random. At times, I tend to ignore the people talking to me while playing the game because the battle just gets so intense. 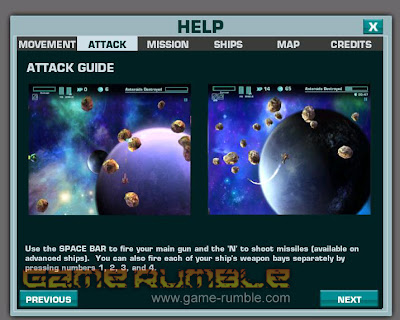 I always don't fail to see the availability to turn off sound, and music and the availability of a help guide on how to play asteroids online as a very important feature of every facebook game. You of course need to get used on how to control your ship and that is by rotating and thrusting forward.

To reward the players even more you can unlock several asteroids online achievements. Don't be surprised, this new asteroids online game actually has some more features to come such as the champion mode and challenge mode.

I really appreciate that Atari decided to put some music in the game and not just sound. It helps players to get the impression that the game is a complete game and not half-baked. However, while the visuals and music are really good, the game somehow suffers from a slow loading time and even comes to a point that it noticeably slows down my system. 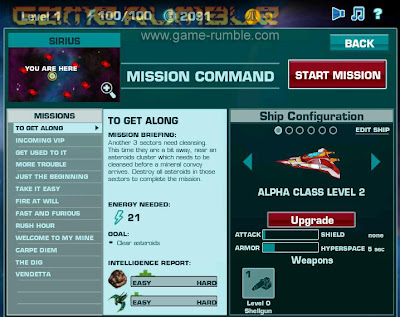 Another that got me really frustrated with the game (aside from the nasty aliens) is that I always have to reach for my mouse to pause the game. Pausing the game should have had its own dedicated button and I hope that's something that they'll add in the future.

Nevertheless, this is a very good job from Atari and we long to see more of their remakes online. This is asteroids in steroids! Excuse me as I get ready to blast some more asteroids!

Very interesting post, i enjoyed reading it. I actually played the original Asteroids a few days ago. Very retro

In terms of success, those numbers lead me to believe that atari is likely not earning anymore than $1000 monthly, which even assuming they only spent $50k making the game, will necessitate the game needing to be live for 50 months to break even.

It's clear Atari pretty much failed here. And here's why:
- Atari is taking a "brand is king" strategy going onto Facebook when the reality is that most brands outside of household names like family fued or bejeweled means little to most users. So they're expecting titles which almost nobody is aware of to carry them to success just on brand alone. I'm not sure how publishers continue to stay in business with this type of logic.

- They used UNITY PLAYER! Facebook is a platform where most users are probably novice computer users and have horrible graphics cards. So expecting an app to grow when people have to install a strange 3rd party plugin that might not run on everyone's computer is laughable. Again, what were they thinking?!

- Misunderstanding of social play. They got the social dynamic wrong on this one - that's fair, but they need to put more work into good balancing.

Overall, Atari is going forward with a brand-heavy strategy and expecting their brands to magically carry them to success. In their financial position (man millions in the red), I don't understand how they think they'll survive. They're a good example of how publishers risk-averse thinking can completely sink them in these competitive times.

I give Atari 8-12 more months before they're in the deadpool.