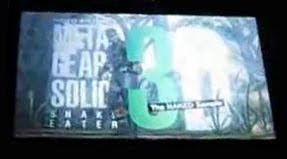 We've gathered news that there was a Metal Gear 3DS Game demoed during E3. It was later confirmed by Nintendo Everything.  According to them, the demo was very short and was developed in only 2 months. Thus, it was called Metal Gear : The Naked Sample.

The title was still unannounced but a YouTube video that we found would seem to say that it's going to be a Metal Gear Solid: Snake Eater

remake from the PS2 version.

There is no release date announced yet for the game. Stay tuned for more updates!
Be the first to comment • Discuss in forums • Posted on Saturday, July 10, 2010