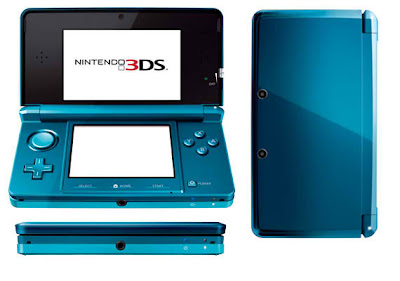 Some more information has been revealed by Nintendo about the 3DS including some specs, colors, and game line ups.

Nintendo's E3 page currently reveals three different colors for the Nintendo 3DS initially which are the Mint Blue, Flame Red, and Cosmo Black. The physical information have also been revealed being approximately 5.3 inches in width, 2.9 inches in height and .8 inches in thickness.

The design is not yet final and could still change. The current design has a small touschreen (3.02 inch) and a larger, wider screen (3.52 inch) which is placed above the touchscreen capable of displaying 3D graphics without the need for glasses. Regardless of color, the widescreen is always surrounded by a black frame. As for the resolution, the screens have a 320 x 240 pixel and a 800 x 240 resolution respectively.

The portable console will be using a cartridge for games just like the Nintendo DS. The cart size has not been revealed as of this time.

Just like the older system, the 3DS retains a four-button control scheme as well as the classic NES-style DPad. There select, home and start buttons are placed in the center, directly below the touchscreen. A circle pad is also visible above the directional pad.

Just like its predecessor, the Nintendo 3DS will also come with a extensible stylus (4 inches max). Some Exciting titles have also been announced for the platform such as The Legend of Zelda: Ocarina of Time 3D (from N64), Paper Mario, Dead Or Alive 3D, Super Street Fighter IV: 3D Edition, and Kingdom Hearts.

Fore more 3DS news, visit us again at 3ds.game-rumble.com.
Be the first to comment • Discuss in forums • Posted on Wednesday, June 23, 2010