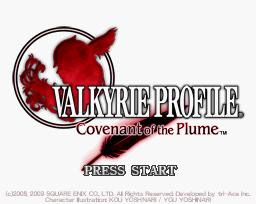 Valkyrie Profile: Covenant of the Plume uses traditional 2D graphics for characters during battle. The background is rendered in 2.5D, rotatable in 4 different angles and two different directions like most tactical RPG's.

The animation scenes during attacks are not in real time, you are taken into a separate screen which looks like the current level you're in but this is actually nice since you get to experience the action more. The cinematics are in 3D and looked fine. Makes you wish it remains like that... But it won't...

The voice over actors did a good job and blended well with the characters. The music is very catchy and fitted the scenes well. Although sometimes, I seem to get an SNES feel for the game music and voice overs of which I don't know if it's just made to sound that way.

You cannot use the stylus to control the characters on the screen, which I think could have been good feature for this game considering that the DS supports it. You move each unit and do actions like attack, hold postion, use provision (item), change arms (weapon), and employ tactic (skill).

Typical of Valkyrie Profile, You can do a combination by properly timing your attacks. Once your Hit rate reaches 100, you can allow certain characters to perform special attacks depending on their equipment (this is old school Valkyrie Profile). The good thing is you don't always have to watch the lengthy special attack animations unlike the first Valkyrie Profile. You can skip with a press of a button to save some precious time.


There are certain tricks to help you win a fight. For example, some boost in your stats are made when you surround an enemy on different angles. Unlocking an ally's potential also gives you additional activities (through employ tactic menu) and would be available in early part of the game.

Valkyrie Profile: Covenant of the Plume is a very difficult game and is gonna require some serious planning on your part. I noticed that at certain times, using particular skills will effect the enemy behavior, which could be or could be not in your favor. As with most tactical RPG's, this would involve a lot of trial and errors. If you die during the battle, you'll have to start over again (unless you quicksaved before you died).

There's a good replay value in this game considering that you can decide which character you try to sacrifice and gain new abilities. However, the game is very difficult and story progression is really slow.

I'm a huge fan of the first Valkyrie Profile game which was named to Valkyrie Profile Lenneth on the PSP. I've also seen Sylmeria for the PS2. Covenant of the Plume is a completely different game than most fans are used to and offers a rather slow gameplay and at times can get very frustrating. The cool action scenes still make a good appeal though and would make this game very hard for fans to resist.