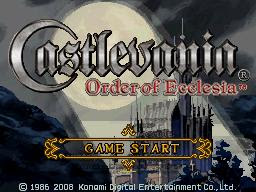 Castlevania: Order Of Ecclesia is the third Castlevania game released for the Nintendo DS. Since the extinction of the Belmont clan, an alternative way has been created to suppress Draculas' powers. These are called glyphs and several organizations pay interest in them, Ecclesia, among them was the most successful and where Shanoa (the protagonist) is a part of.

The story revolves around Dominus, a glyph that is said to be the ultimate counter-measure against Dracula's power and the most powerful of all glyphs. Shanoa is suppose to be the bearer of this glyph, but during the ritual, a man named Albus interuppted. What is Albus' connection with Shanoa and what does he want from the Order of Ecclesia?


A mix of old-school 2D graphics and Semi-3D effects create a stunningly new experience. Old castlevania fans may get a feeling of De Javu when they play this, remembering their experiences from Castlevania: Symphony of the Night. The Animation is smooth, although unlike Symphony of the night, Shanoa is actually stuck doing the same animation regardless of the which weapon she uses.

While the music arrangement was great, I think one of the limitations of games in cartridges is that it is somehow inferior to games in Disc. Compared to Symphony of the Night, which is a decade long game, I think I liked and remembered more music tracks from the latter. Order of Ecclesia is pretty good on its own though.

Having to push two different buttons to attack made the game a little hard to deal with. You might need exercise those fingers first before you play Order of Ecclesia as this game requires acrobatic finger skills! The touch screen can be used to point to specific places on the world map.

The game inherits from the old hack and slash (or whip) style of old castlevania games. The difficulty was fair, you might have to die a few times before figuring things out. Save points are placed in reasonable areas and warp portals are also there so you could navigate in different areas of the map you're currently in.

You can equip different weapons (through glyphs) and armor (usual equipment system) as well as use recovery or special items. Weapons come in different forms such as sword, axe, hammer, sickle, magic, etc. 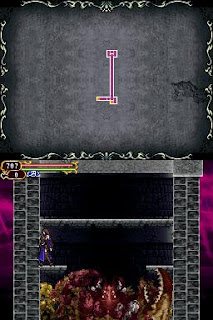 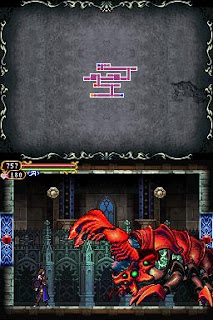 The most notable parts of the game which you'll probably recognize right from the start and would probably be hooked with for the rest of the game are The Villagers Quest, Absorbing Glyphs (which are your main weapons) and collecting items dropped by enemies.

Because of the Glyph and Villagers Quest feature, the game is high in re-playability. You also get some bonus (extra modes) when you beat the game such as playing an extra character (not to be spoiled here).

While I enjoyed Castlevania: Order of Ecclesia, I feel like it could still use some improvements. The game is definitely worth your money though and which every Castlevania fan especially DS owners should have in their collection.