Home » SCEA » Frobisher Says! — Check Out Why You Have To Check This Free Vita Game

Frobisher Says! — Check Out Why You Have To Check This Free Vita Game 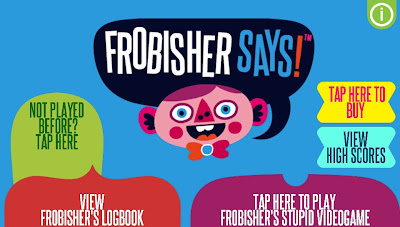 This free 556 MB download game from the PS Vita PlayStation Store came out last October 23rd. We have two words to describe it — crazy — awesome.

Frobisher Says is a set of mini games randomly generated for the user to play. Think of it as a bring me game, or if you're familiar with Warioware, you'll pretty much get the idea.

Frobisher, some creepy-looking guys will give you an instruction and you have to finish that as soon as possible. The set of games is diverse, and it's easy to judge the game as something to pass on from the first look but I highly encourage you to go try it out. There are about 53 different set of mini games. You can also view Frobisher's logbook to check how many of the games you've completed.

Frobisher Says utilizes almost all of the Vita functions in fun ways. For example, you could be instructed to fan and person and so you'll be tilting your PS Vita up and down as if you're really fanning someone. You could also go as simple as playing a short platforming game to find a flan.

The game integrates with PlayStation Network to record your scores. In the game, you can check the global scores or your friends' scores. You can also play with 8 different players on one PS Vita unit by taking turns and choosing your individual avatars.

If you think the minigames are not enough, you can also purchase an add-on content called "Frobisher Says! Frobisher's Super Fun Pack!" for an added 15 extra mini-games

Frobisher Says! is also available in variety of languages other than English such as Spanish, French, Italian, etc. The game was developed by Honeyslug Ltd. and has an ESRB rating of E10+.

Sony did a good job in releasing this game to showcase most of the Vita's features and doing it for free. However, it's great to be played privately in one room. Frobisher really says it all.
Be the first to comment • Discuss in forums • Posted on Saturday, November 10, 2012