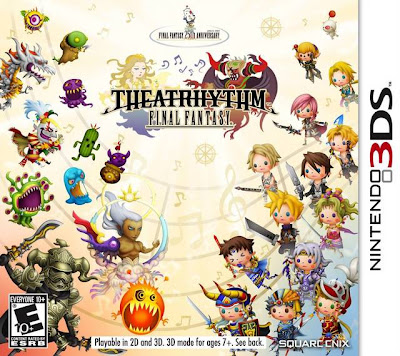 Theatrhythm Final Fantasy Demo is now available on the Nintendo eShop. Here's another good news, it has unlimited number of trials!

The demo starts with a nostalgic Final Fantasy main theme and title screen. You'll be taken to the game right away once you touch the touchscreen. It  starts with a tutorial on how to play the game but you can also skip it if you like.

After you're through with the tutorial you'll be taken to the song selection screen where you can choose to play "The man with the Machine Gun" song from Final Fantasy VIII or "The Sunleth Waterscape" form Final Fantasy XIII. You can choose from basic, expert or ultimate score for the two songs. Each difficulty can also be practiced. If you die on a challenge, you can choose to retry or play a demo to show you how the level is played.

Unfortunately, your statistical data is cleared once you close the game. But it ain't such a bad deal, right? Head on to the Nintendo eShop now and download the demo! Theatrhythm Final Fantasy is already available on retail for $44.90 at play-asia.com.
Be the first to comment • Discuss in forums • Posted on Thursday, August 30, 2012