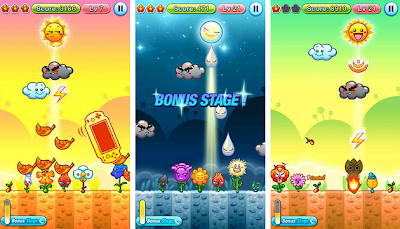 Handheld consoles aren't exactly a hardcore-only type of platform. At least that is the impression we get  with this upcoming puzzle game called SunFlowers for the PS Vita.

The game basically allows you to control the sun and grow flowers on the ground. You can shoot rays of sunlight that can pass through clouds and produce water, while hitting directly on a seed or flower will burn it. The flame can be extinguished with a drop of water. Also, hitting dark colored clouds sends off a lightning to your seeds and flowers that could burn them.

The game features a virtual garden where every flower you grow goes into. This feature utilizes the PS Vita's near feature and you can also offer your flowers to your friends.

SunFlowers feature three difficulty modes: Easy, Normal and Hard. Playing on the normal and hard difficulty allows you to collect the most unique flowers. Unique flowers can also be obtained on bonus stages.

There are 330 different flowers to collect and the game will also support a leaderboard system. The game will use a lot of the PS Vita's function such as the motion sensor wherein you need to shake your handheld in order to clean up falling leaves during Autumn.

The game and its music is highly inspired by the classical music Four Seasons by Vivaldi. Sunflowers is being developed and published by The Game Atelier and will be coming out this fall.
Be the first to comment • Discuss in forums • Posted on Friday, August 24, 2012