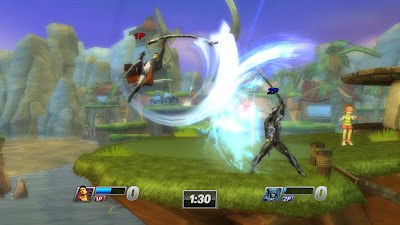 Well it seems like the Vita is getting Raiden after all, but not in the form of Metal Gear Rising: Revengeance but with the upcoming (smash bros brawl clone game), PlayStation All-Stars Battle Royale.

PlayStation All-Stars Battle Royale will showcase the best PlayStation characters such as Dante, Kratos, Heihachi, Parappa the Rapper and many more. As part of the cross buy initiative, people who buy the game for the PlayStation 3 will get the Vita version for free.

It's good that we're at least seeing Raiden in a Vita game. Earlier this month, Metal Gear Rising: Revengeance producer Yuji Korekado commented that the Vita was too weak to handle the Revengeance, giving us the impression that the game is unlikely to come to the handheld system.

So what can Raiden do in this game? Well we all know how he can make those swift sword attacks. He can basically build up a tremendous amounts of AP with his combo attacks. He also have a lot of flexibility with the way he does and ends his combo on air or on the ground. As with the upcoming Metal Gear game, his super attacks require players to use the right analog stick to slice through enemies.

Raiden's partner, Solid Snake previously appeared on a Nintendo-exclusive crossover game called Smash Bros. Brawl. PlayStation All-Stars Battle Royale is due for release in the US on November 20, 2012.
Be the first to comment • Discuss in forums • Posted on Wednesday, August 29, 2012