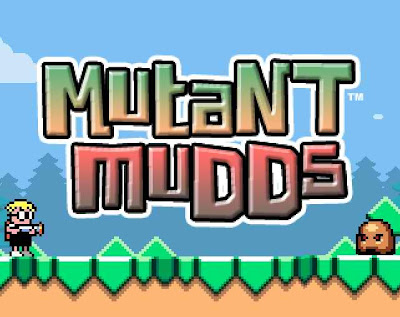 A game highly inspired by the 8-bit and 16-bit era sets Max on a journey to destroy mutants made of mud that invaded the planet.

Mutant Mudds is a 2D platformer from Renegade Kid. You start off by visiting doors to different worlds infested by mutants and your goal is to collect the water sprites which are at the end of every level. Max is equipped with a water canon which is basically your weapon against the mutants. He is also equipped with a jet pack which enables him to temporarily suspend in the air and leap between platforms.

The game sets itself apart from other 2D platformers with the player's ability to jump between background and foreground; Perhaps inspired by the Fatal Fury fighting game? It's part of the core gameplay, so accessing certain areas in a level requires you to jump between layers.

Enemies come in different types, there are those that just move on the ground, some fly and drop bombs and some spit out mud. You're given three lives and losing all three kills the character and you'll have to restart the level; falling on pits brings about the same consequence.

The game provides sixteen different levels by default which include running on plain ground, ice, and lava. Once you've beaten all sixteen levels, another four will be unlocked. Each level is packed with difficult challenges but if you're not satisfied, there are also these moon levels which you can access given you've met the circumstances required in order for you to access them.

While the game allows you to advance on certain levels as you like, it's not possible to finish some of the levels without the necessary upgrades to your equipment. To do so, you have to collect a number of golden diamonds and go to granny (located at the center door). The upgrades provide a boost to your equipments such as rapid fire, extended hover and a vertical boost.

The game has an excellent level design, combining 2D side-scrolling with background and foreground jumping works really good in 3D. The 3D depth can be adjusted to your level of tolerance. Playing the game with the 3D switched off brings about just as much fun.

The music and sound effects are unique and exclusively made for the game. It highly fits the the style and theme of the game, having the same 16-bit style and feel in it. 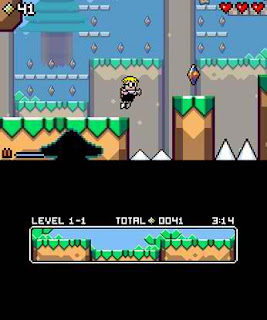 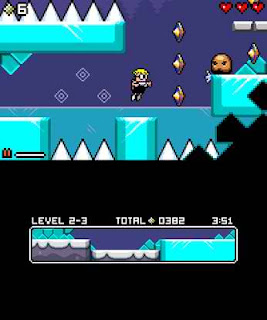 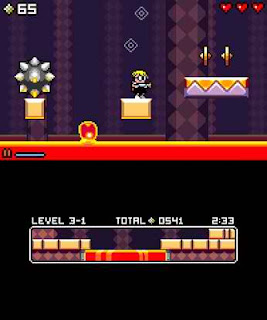 There is nothing special or complicated about the game controls, you basically control the character as you would on any typical platform game. You can use the circle pad or DPad to move the character, the Y and X buttons to shoot and the B and A buttons to jump. You can jump between the background and foreground by stepping on orange-colored tiles and then pressing the jump button. Jumping to a layer is only one-way, you'll have to find another tile to get you back to the layer you came from.

Quite ironically, considering that the game is released on the 3DS which supports touch controls; the game doesn't have a single touch mechanism, not even on the main menu. While it makes effective use of the lower touchscreen to display the current level, total golden diamonds and time to save space, it has this next to useless display of the current level. Better than nothing, I guess.

The game provides three different slots to save your progress. It's a good way to manage save files for different people who play the same game on the same 3DS unit.

Mutant Mudds is a perfect fit for retro gamers and completionists. It's more than enough to satisfy your side-scrolling cravings, and provides a hefty challenge as well as a number of things to unlock.

Mutant Mudds was released on the US eShop on January 26, 2012. It's available for purchase for $8.99. A game demo is also available if you want to try it out.

For more 3DS reviews, visit us at 3ds.reviews.game-rumble.com.
Be the first to comment • Discuss in forums • Posted on Monday, August 27, 2012