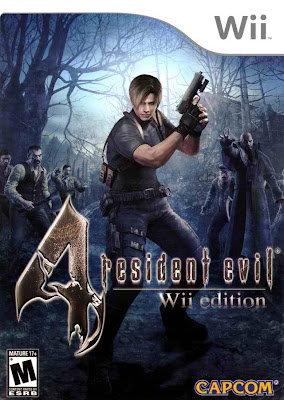 Resident Evil 4 has been ported to several platforms already, but one that truly stays amazing is the Wii version.  Before the Wii edition and even before the mobile versions of this game, Resident Evil 4 was a game celebrated on the PS2 and the Nintendo Gamecube. The Wii Edition is at its roots, a Gamecube port.

Leon Kennedy who in this game works as a  U.S. Secret Service agent is sent on a mission to rescue the US president's daughter, Ashley Graham. He finds himself in a town inhabited by a cult group called the Los Illuminados. Most people in the village are mind-controlled, violent, but look entirely human. They are your enemies and you'll be dealing with them throughout the entire game.

The World Of Resident Evil 4 is one of the biggest and open environments of its time generation (I'm talking 2007 and below here). You could open doors in real-time, climb ladders (and also drop it along with climbing enemies), destroy objects, kill animals, birds, bats, animals and things that creep. You also don't just get to walk on land but you can also get soaked in water. Shoot at something and it can fall on land or water (if it's above the water), the game environment doesn't feel confined.


The character models look quite fair, there is enough detail in them to make things look lively. For example, moving the camera around also swings Leon's hair. If not for the Wii's limitation to display HD quality image this could've been a better game. I'm playing the game at 480p resolution though on a 32" HDTV and it did show some noticeable improvements in graphics compared to just using standard composite cables.

Resident Evil 4 breaks down missions into several chapters and sub chapters such as 1-1, 1-2, 2-1, 2-2, 2-3, etc. I think this is good as it gives you room to relax. It's also good indication that you need to take a break from playing.

Once in a while you get to experience some adrenaline-rushing scenes like being chased down by a huge rock or get attacked by a mob of mindless people.

Another interesting and outstanding thing about Resident Evil 4 Wii Edition are the Wiimote controls. The most prominent feature in the system is being able to point your gun with the Wiimote. Leon basically follows the pointer and moves his shoulders and elbows depending on where you're pointing at.

The knife however doesn't work the same as Leon only slashes on where he's looking and sometimes it can be a little hard to estimate how far you are from an object you want to slice. If you need an excuse to get fit while playing this game you can also just swing the Wiimote while holding the C button to slice with your knife. To put things simply, the Wiimote really makes for a very immersive experience.

The enemies are quite intelligent, when they reach a certain distant they will just come running at you. The type of enemies vary from maybe 4 to 5 types of which some are bare-handed while some carry weapons like pick-axe, dynamite, chainsaw, and others. Given you've earned enough money, you can have access to powerful weapons early in the game.

The enemy bodies are also very rigid, you can shoot them on any part of the body and will react based on where they got hit. If you hit a zombie on the leg for example, they'll fall off to their feet and when their holding something like a dynamite for example then they get exploded along with it.

Different from other Resident Evil games and if you've just started the game, you might wonder why you're getting money (PTAS) and what you're going to use them for. Well, somewhere along the way you'll be able to buy weapons, equipments and supplies. You'll also be able to sell your equipment.

Once you're far enough in the game, you also get to run with the president's daughter, Ashley. The gameplay slightly changes with her presence and you got to take care of her. She's very fragile, you can hurt her with your own knife or gun (again, it's an open world). Do that and it's game over.

It's immediately impressive how Ashley and Leon coordinates. They behave differently like a real man and a real teenager.

Upon finishing the game you'll be able to unlock several things such as Assignment Ada which allows you to play as Ada Wong, a movie browser and  a new mode called the Mercenaries mode. For those who want to get a little more out of their money, this is your chance. If you want to beat the hell out of your enemies because they killed you several times, this is also your chance. There are extra characters to play and extra outfits to unlock in this mode.

My only take away from this game is that it somehow strayed away from the survival horror theme. The element of surprise has somehow gone missing, and it's become more of an adventure-shooting game. While the graphics overall is comparable to the Gamecube version, the Wiimote integration made this a completely different experience. It's the same game, yes, but less the frustration.

If you own a Wii or thinking of picking up one, Resident Evil 4 is definitely not a game to miss. Make sure to add it to your library and you can buy it very cheap from play-asia.