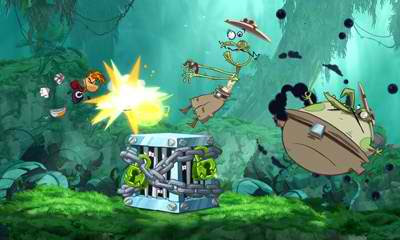 Rayman Origins for the 3DS demo has just been released on the Nintendo eShop. Here's our first impression about it.

I've seen the PS Vita version and I was very impressed about it. However, the 3DS version of Rayman brings something else on the table.

The 3DS demo brings in three different levels of the game. The first one called "Swinging Caves" is the normal platform adventure. I'm really impressed by the detail of the environment here especially in 3D.

The second one called "Playing in the Shade" makes you chase after something while everything is dark including your character. This level is really adrenaline-rushing.


The third one makes you ride on some sort of bird/insect. You can shoot a projectile, suck out enemies and use them as a weapon.

The graphics is really impressive. The animation sequences were smooth, and the 3D really looks great in this game. In 2D the graphics seem a little dull but thanks to the 3D, the images become a little sharper. I'
m satisfied, but I still hope that they improve more on the graphics department on the full version.

There are a few things missing in the 3DS version that was present on the Vita version such as zooming in and out but the 3DS makes up for this by adding a few more features such as a progress map on the bottom screen.

The controls are very sophisticated. Rayman can basically do more than just jump as he can punch combinations, kick, swim, swing, jump against walls and even float in the air.

It was a very satisfying demo. The levels are long enough and you get to do different things as well. You get 30 tries which is more than enough to get a feel of the game.

Rayman Origins for the 3DS will be released this June 5, 2012 for the US and June 8 in Europe. Stay tuned with us for more 3DS Demo impressions in the future!