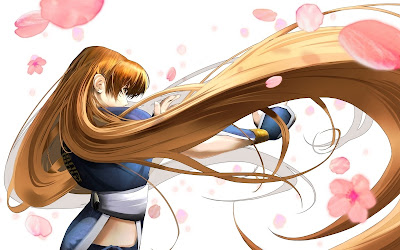 Dead Or Alive Dimensions is fighting game from TECMO made exclusively for the Nintendo 3DS. Welcome the cast of 26 characters from the entire series starting from Dead Or Alive to Dead Or Alive 4. Original characters such as Kasumi, Ayane, Hayabusa, Tina, Lei Fang and more makes for a big comeback.

There are various modes to choose from including Chronicle, Arcade, Survival, Tag Challenge, Free Play and Training, Local and Internet Play, Throwdown, and finally the Showcase which works with the 3D Photo Album.

The Chronicle mode is basically the story mode and takes you back to different chapters of the Dead or Alive series. From the start, you will notice the lack of lip movement from the cutscenes but gradually changes as you move along to more recent chapters. Some small tutorials about the game is also presented as you progress.


The battle system has been mostly unchanged since Dead or Alive 4. Any old time player may notice though that the danger zones are no longer in this game. As before, the nature of Dead or Alive is a very fast-paced game... There's very little room for an idle mind which somehow makes this game a little bit of a turn-off to some people compared to Street Fighter.

Dead or Alive Dimensions features a very vast environment that allows characters to fall off the bridge for example and still continue to fight. Some stuff like walls and ice break as part of the environment.

The character models are well modeled, the movements are fluid and you can even collect costumes. I'm very impressed with the character details, I would say it's slightly better than the PS2 models, thanks to the 3DS's modern shaders, the clothing texture just look very good.

Ironically being a 3DS title, Dead or Alive Dimensions suffer from a severe frame rate drop with the 3D on (30FPS with 3D and 60FPS without the 3D). On the other hand, unlike Super Street Fighter IV 3D Edition, you can quickly turn on and off the 3D and see improvements immediately. The 3D makes for some good popping out effect depending on which character you use. I would say that the 3D for Hayabusa's winning pose did make for a good 3D effect.


One might wonder how the bouncing breast feature goes. Well, they've made them a little more subtle or modest I would say and a little less obvious during gameplay. They've trimmed down sexy a little bit here, maybe because the 3DS is primarily a handheld gaming for more minors than consoles where DOA was previously released in.

A new introduction to the Dead or Alive series is the tag challenge where you can choose a second character to tag with during a fight. However, this feature is very limited as you can't control the other character and you have very limited control on when to switch characters.

Dead Or Alive Dimensions make some very good use of the Spotpass feature, allowing the game to transfer fighting data of your most used character to another player's 3DS. This feature is called the Throwdown challenge, pretty much like the ghost feature in Tekken where other players are basically able to fight you base only on your fighting data. You can have several throwdown challenge requests and it's up to you on which ones to take.


The game also has an online mode and you can battle against your friends or players from the same region or anyone from around the globe. Your opponent is automatically set for you, and you can select the characters already available or those that you have unlocked. On the other hand, your opponent may use a character you haven't unlocked.

The online mode uses a a grade system like A, B, C, D, S with SS being the highest. Other than ranking, some statistical data are also shown about your opponent before you proceed with a match. The online mode can get very tricky as you tend to lose your ranking (downgrade) if you disconnect or get disconnected during a fight. So, make sure you got a pretty good internet connection if you're planning to maintain that stature. Just like Super Street Fighter IV 3D Edition, you also get points for beating your opponents.

Are you fond of photography? Well, this game allows you to live a dream of a photographer and you got the  Dead Or Alive babes and boys as your models. There is a certain feature called "showcase" where you can shoot and save your photo either on 2D or 3D, the  poses you can make depends upon the available figurines you collect throughout the game which can be obtained by playing different modes of the game, spending some StreetPass coins or via SpotPass delivery.

Just in case you're wondering, you can configure the character voices to use either English or Japanese. The English voice overs works as good as the Japanese version for me so I could live with either of them. The music is as good as the previous once with a mix of Japanese and a little bit of rock and roll.

As for the touchscreen controls, the game let you choose from a variety of combination moves using the lower touchscreen. However I find it very hard to utilize this feature unlike in SSF IV 3D Edition since moves in Dead or Alive are basically combinations. The physical buttons do just fine though...

Dead Or Alive Dimensions while lacking the desired 3D effect is undeniably one of the best fighting games that the 3DS has to offer. The game is packed with content and almost fully utilizes all the Nintendo 3DS features.