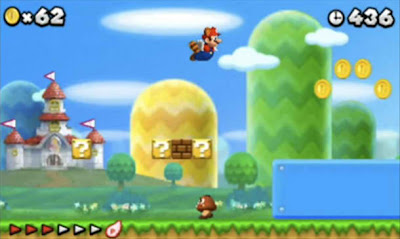 According to Satoru Iwata the New Super Mario Bros 2 will feature Mario, Luigi, and all our favorite Mario characters. It wasn't said though which characters will be playable.

The Screenshots.html tell a little about golden enemies, climbing spider webs, and the racoon tailed Mario. New Super Mario Bros 2 release date is scheduled this August 2012 in Japan and the US.
Mario fans what can you say about this new announcement? Would this be another addition to your 3DS library?
1 comment • Discuss in forums • Posted on Saturday, April 21, 2012

wohoo! a new mario game for the 3DS!. please let there be a new castlevania too! :D :D :D