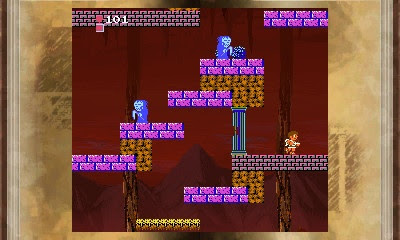 Just like most of the 3D Classics game that came out after 3D Classics Xevious, an extra border or frame has been added to make the 3D effect more obvious and put some depth into the game.


The game is basically a platformer, with an angel boy named Pit who can shoot arrows. You will fight against the evil goddess Medusa who stole the three sacred treasures from "Angel Land".

Aside from jumping from one platform to another and shooting arrows, the game also involve purchasing items to aid you in battle. Travel to the underworld, the overworld and the skyworld and battle against the gatekeepers.

Don't forget to load up with a 3DS Prepaid card! 3D Classics Kid Icarus is available for $5.99 on the Nintendo eShop.