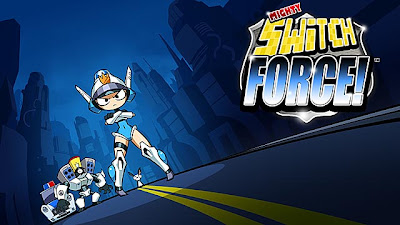 Mighty Switch Force was one of the most anticipated games for the Nintendo 3DS eShop back on 2011. In this review, we'll touch on the overall features of the game. Let's find out what WayForward has to offer with this action platform puzzler.

Patricia Wagon, a cybernetic peace keeper (a police?) is tasked to go after Space Hooligans and restore peace on Planet Land. Assisted by Corporal Gendarmor, a pellet gun, and the ability to transform the world around her through a Helmet Siren, go through 16 different levels (or Incidents) and bring back justice to the land.

It's a platformer, that's the basic premise of the game. It becomes a puzzler when combined with the ability to toggle blocks with a flick of the L or R button. Toggling blocks allows you to cross platforms, get to one part of the level to the other, and sometimes kill enemies.

You can of course shoot enemies with your handy blaster. You can shoot left or right, but not up and down. The projectile basically just shoots across the screen horizontally from one point to another. It would seem as though more emphasis was given to solving puzzles than shooting enemies.

To complete an incident, you will have to arrest all five of the hooligan sisters (blonde girls). Then you have to locate Corporal Gendarmor to get you out of the level. Each level varies in difficulty, and entirely depends on how fast you figure out what to do.

Some levels are no-brainer, while most can be completed with some patience. And as said earlier, there are only sixteen levels in this game which I feel is rather short. Thankfully, most levels provide adequate challenge to keep you occupied.

Boss fights aren't the thing in this game, there's only one boss through out the game and it's fairly easy. There are a few things to unlock once you finish the game for the first time, and on beating the par time. Beating all the level's part time puts a star beside that level.

For every incident you solve, a short illustration is shown (in 3D of course). My only problem with these illustrations is that they tell very little about the story of the game. There's also no written dialogue of any sort in the game, leaving you totally dependent on what you read about the description of this game when you bought it on the Nintendo eShop or WayForwards' website. 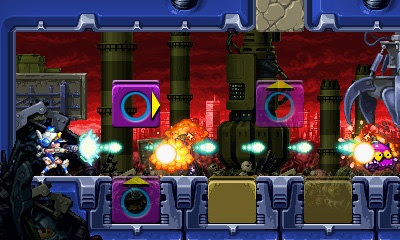 As for the 3D effects of this game, it was quite okay at the start. The 3D is obvious from the main menu, on the first stage and most of the levels. For most part of the game, there is clear distinction of what's near and what's far. It's not super impressive, but something that most 3DS owners would come to appreciate.

I like the way the main character or the enemies get smashed on the screen when you switch blocks and you/they're right in front of it. Talking about enemies, they aren't too intelligent but enough to annoy you from time to time.

If there are other things aside from the 3D that needs to be praised in this game is the great character design, smooth animation and beautiful music. Great character design, that's probably what made you interested in the game in the first place when you first saw the game's poster. The animation is fluid, every frame is well-thought through. I like the way Patricia Wagon transforms back to her normal human look when she dies, there are also separate animation frames when she normally walks or just shot her gun.

Yes the music is just great, they could probably sell it off as a separate product (Mighty Switch Force OST or something). The game is also well-voiced saying things like "Justice Served", "Yummy", "Checkpoint", etc. depending on your action. It just make things so lively.

For a game built on the Internet age, Mighty Switch Force sure lacks some connectivity features. There's no Spotpass or even Streetpass support. There isn't even any use for 3DS coins here...

Should you bet your $5.99 for this game? Sure you should! Mighty Switch Force is a complete and satisfying game. It's definitely one of the most decent eShop games you could buy at the moment. WayForward did a decent job on this one.