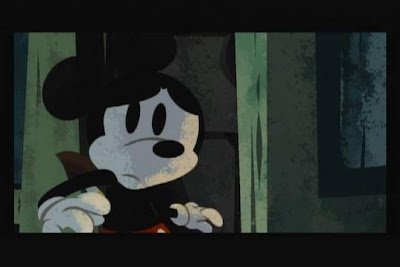 So our speculation was right all along. The upcoming Epic Mickey: Power Of Illusion for 3DS is somehow related to the old SEGA Genesis game called Castle of illusion.

Aside from this epic revelation, a few more details about the game was uncovered. Epic Mickey: Power Of Illusion requires heavy use of the 3DS Stylus. The game would basically require you to draw stuff, and the quality of the drawing matters.


With that said, you will have access to paint and thinner as with the first game. You'll be able to tap coins in the game, further utilizing the use of the stylus.

The level design is based on animated Disney films and the game graphics itself is inspired by 16 bit graphics. The game will use hand drawn sprites and parallax backgrounds, sort of makes you wonder why but would be interesting to see.

You will battle against the witch from Snow White and she's the main villain in this game. Other Disney characters such as Scrooge Mcduck, Oswald, and Minnie Mouse would make an appearance in the game.

Still no definite date announced for the release date. Stay tuned for more news about this game!