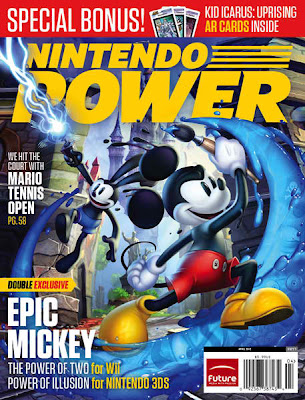 An Epic Mickey game for the Nintendo 3DS has been confirmed by Nintendo Power magazine and this one is exclusively being made for the 3DS System. The game is called Epic Mickey: Power of Illusion.

The game is being developed by Dreamrift (the same team that worked on Henry Hatsworth for the DS) and being worked on apart from the Wii, PS3 and XBox 360 version (the other being called Disney Epic Mickey 2: The Power of Two). Rumors say that there will be 2D elements on the game (as with the first version).

Epic Mickey was a Nintendo Wii exclusive game released back on November 2010. It featured Mickey Mouse being drawn into the lost world of forgotten Disney characters. Epic Mickey: Power of Illusion is expected to arrive on the 3DS late this year.

No videos or Screenshots.html has been provided so far. Stay tuned for more news about this game!